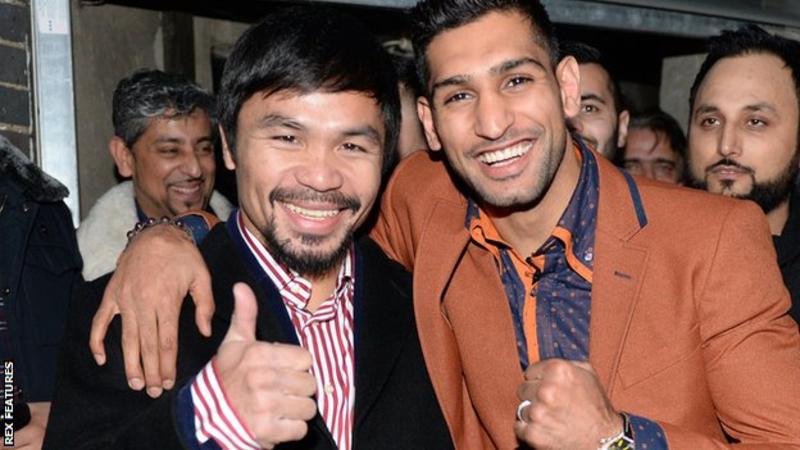 The two fighters had announced the “super fight” for 23 April on Twitter at the end of February, with the United Arab Emirates expected to be the venue.

“I’m talking about another proposal for another fight, not Khan. Khan won’t be Manny’s next opponent.”

The April fight was originally arranged after Pacquiao’s followers on Twitter voted Khan as the opponent they would like to see the 38-year-old fight next.

Pacman rolls back the years

Khan, 30, who won silver as a lightweight at the 2004 Olympics, beat compatriot Kell Brook, Australia’s Jeff Horn and American Terence Crawford with 48% of the vote carried out by Pacquiao.

Arum also told the Los Angeles Times that the $38m (£31.1m) offer for the bout had failed to materialise and that the duo could not face each other until the second half of 2017, under revised terms.

Arum said Pacquiao’s advisor Michael Koncz would negotiate a revised fight against an alternative opponent that could be staged in July.

Pacquiao, who has won 59 of his 67 bouts, claimed the WBO title with a unanimous points victory over American Jessie Vargas in Las Vegas last November.

Khan’s last fight in May 2016 saw him jump two weight divisions to 155lbs, when he challenged Mexico’s Saul Alvarez for the WBC middleweight title, but was knocked out in the sixth round. BBC Sport

Arsenal v Bayern Munich: Arsene Wenger ‘revolted’ by referee but proud of side despite thrashing

Pacman rolls back the years