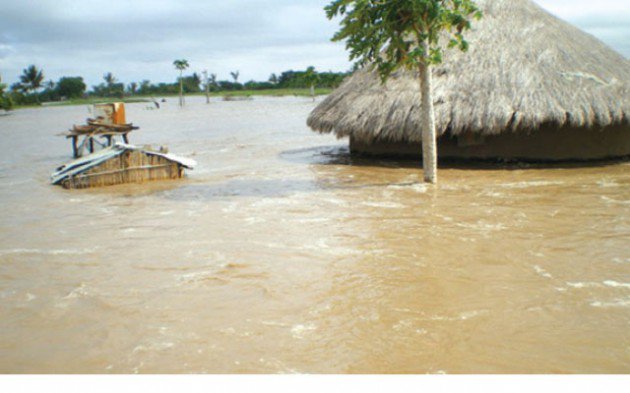 This comes as about 800 villagers in Tsholotsho North have appealed to the government to be relocated saying they were no longer prepared to risk their lives again in the flood-prone area.
Persistent heavy rains have triggered floods across the south, cutting road links, threatening crops and affecting thousands of people.

MSD deputy director Rebecca Manzou said more rain was expected.
“…we are still experiencing normal to above normal rainfall and we are forecasting that rains will last up to end of March,” Manzou said.

About 900 villagers from Mahlosi, Mahlaba, Mbamba, Maphili and Mbanyana under Chief Mathuphula were left homeless after their houses and belongings were swept away by Cyclone Dineo-induced floods.
The villagers are now temporarily housed at the overcrowded Sipepa Hospital.

“We are appealing to the government to look for alternative land for us because continuing to stay in that place is now a disaster on its own,” said Elisia Ndlovu, a 59-year-old  mother of four said.
Daniel Ngwenya, 67, from Mahlaba Village, said: “I don’t think there is anyone among us who is willing to take chances to go back there because even the water levels are shocking.

“As much as we wish to be relocated our major worry is will the government be able to avail us with land that has got rich soils like the ones we had for years.”
Sipepa Floods Victim Camp manager, Andrew Gabela, said: “We had Local Government minister Saviour Kasukuwere he was here, he heard the concerns and promised to look into that so that they can speed up the process.”

The MSD said they did all they could to alert authorities on impeding floods.
This comes as the Civil Protection Unit on Monday detailed widespread flooding as a result of heavy downpours in Masvingo, southern parts of the Midlands and Manicaland provinces and Matabeleland South.

“A number of communities have been marooned and more are likely to be marooned as the rainfall is expected to be sustained for the rest of the season,” Kasukuwere said on Monday.
“Incidents of drowning are on the upsurge.”

Civil Protection Unit structures were on high alert and attending to the emergencies, the Zanu PF political commissar said.

Aid agencies such as the Red Cross Society of Zimbabwe (ZRCS), United Nations Children’s Emergency Fund (Unicef), Plan International and many others have come to the aid of the affected Tsholotsho villagers, providing food, tents and toilets, but Gabela indicated that the situation remains dire.

“We need more tents because there is overcrowding. We need more blankets as we still have people with no blankets. We need clothes, toiletries and oral care in the form of toothpaste and toothbrushes, sanitary ware and Vaseline,” he said.

Gabela cited the need for at least seven more temporary toilets to add to 35 temporary latrines that have been pitched by the ZRCS.

At least 370 pupils from Mathuphula and Mahlaba primary schools have since been integrated at Sipepa Primary School.

Unicef donated some classroom size tents as well as learning materials. Gabela appealed for furniture for the temporary classrooms.

India to build hospitals in Zim