Angel di Maria scored twice as Paris St-Germain stunned Barcelona to leave the Spanish side in danger of failing to reach the Champions League quarter-finals for the first time in a decade. 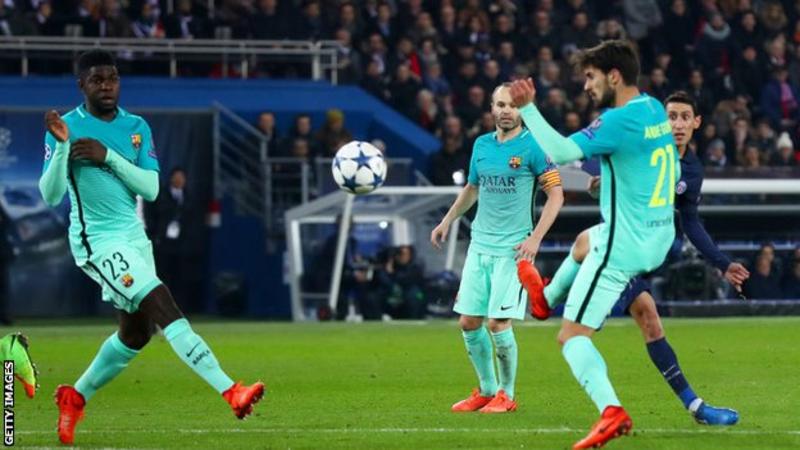 PSG dominated this last-16 first-leg tie throughout and took the lead through Di Maria’s curled free-kick.

Julian Draxler added a second with an angled drive before Di Maria curled an effort into the top corner.

Edinson Cavani then sealed a famous win with a powerful fourth.

A lacklustre Barcelona – with Lionel Messi, Luis Suarez and Neymar largely anonymous – did not produce an effort of note until seven minutes before the end when Samuel Umtiti headed on to the post.

The defeat leaves Luis Enrique’s side with an almighty task to stay in the competition when they host PSG in the return leg on 8 March.

No side has managed to overturn a four-goal first-leg deficit in the Champions League.

Barcelona breezed into the knockout stage by topping Group C, winning five of the six games they played.

Their one defeat was also the only time they conceded three goals in a group-stage game, when they lost 3-1 at Manchester City.

At least in that match they managed to score – Messi putting them ahead at Etihad Stadium – but at the Parc des Princes on Tuesday they barely troubled Kevin Trapp in the PSG goal.

The visitors regularly squandered possession and looked lethargic throughout. When they have not been at their best in the past, their star players have stepped up. But on this occasion they offered nothing.

Messi, so often capable of creating something from nothing, made uncharacteristic mistakes and was at fault for PSG’s second when he lost the ball to Draxler, who then played a one-two with Marco Verratti to slice through a static defence and put the French side in control.

It was one of the worst Barcelona performances in recent memory but PSG were also at their absolute best and, in truth, could have won by an even bigger margin.

They finished the game with 16 shots on goal, 10 of those on target.

PSG have long been the dominant force in French football, winning their domestic league title every season since 2013, but they are yet to transfer that form into Europe.

They have never progressed beyond the quarter-finals but dominant wins home and away against Chelsea at this stage of the competition last year suggested they had finally joined the continent’s elite, only for them to then lose against Manchester City.

Unai Emery, PSG’s Spanish manager, had faced Barcelona 23 times before in his coaching career and won just once.

But Emery has form in Europe. He led Sevilla to three successive Europa League titles from 2014, getting the best of the players at his disposal and that is proving to be the case at PSG.

Cavani now has 34 goals in 32 matches while Di Maria is producing consistently what he only managed in flashes at Manchester United. Draxler, who underperformed at Wolfsburg, has excelled since his January move to the French capital.

All three were key to Barcelona’s downfall and this could prove to be a watershed moment for both PSG and Emery.

“Mentally they will go on again and they will believe now they are capable of winning this tournament by beating one of the best teams.”

Barcelona were one of the favourites to win the Champions League at the start of the season but will now need to produce one of the greatest comebacks in football to stay in the competition.

They are more than capable of scoring goals for fun at the Nou Camp, having hit three or more in six of their previous seven games.

Borussia Monchengladbach were the last side to visit Barcelona in the Champions League and they lost 4-0 in December.

But PSG possess much more quality, with Di Maria and Cavani more than capable of scoring an away goal that would surely put the tie beyond Barcelona.

It is sure to be one of the toughest tests of Enrique’s Barcelona career to date.

Taking on Trump: Is the US facing a constitutional crisis?