Blindness has not inhibited Johannes Lovemore Landini (42) from being one of Mutare’s finest weavers and craftsmen. 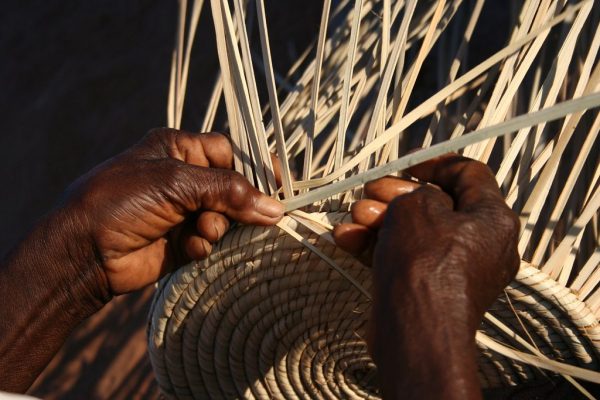 Many have found it difficult to accept the fact that the gritty Landini only learnt weaving at the age of 30 when he completely became blind. He was a painter by profession then.

“I was devastated because 30 years is a very difficult age to adapt. All my dreams blacked out. I had lost my independence in adulthood and was depending on others,” he said as he wove out a drawer of four-tier chest of drawers at his home in the high density suburb of Sakubva in Mutare.

Landini painfully recollects how his world was turned upside down.

“I was a painter in a construction company for a decade and I believed I was in perfect health. It started with a nagging headache. My eyes caught up the pain as the headache got progressively worse,” said Landini.

His once colourful world was quickly degenerated into a grey blur.

“I was referred to Parirenyatwa where I was told that I could only try an expensive operation in South Africa but still with a rare chance of healing as it could even worsen the condition. So I just continued with painkillers until I went completely blind,” the told the Daily News on Sunday.

Although he had to grope in the suddenly dark world he refused to throw his self-esteem down the gutter.

“I never entertained the possibility of being a beggar. I had been raised on a philosophy that says one has to earn a living no matter what,” he said.

When he completely lost his sight in 2002, his family approached the social welfare ministry which assisted him to secure a place for him at Jairos Jiri Centre where he did a two-year course in basket-weaving.

“The Independent African Church (Muchakata) assisted me with food and other necessities and while fees were being paid by the social welfare department,” Landini said.

Going to Jairos Jiri helped him to quickly adjust to life without sight.

“When I lost my sight it was very difficult but when I met others in college I got the support and encouragement that gave me the will to fight on and accept my condition. I also became a very good weaver thanks to the course I did there,” he said proudly.

Now Landini can weave around anything with a frame. In fact, he is so highly rated that some weavers with sight now come to learn from him.

“I feel that there is only one weaver who is superior to me in the whole city and that is Lovemore Dick. There are many weavers with sight who come to consult me when they get stuck here and there,” he said.

Sadly, Landini is fending for himself under very trying circumstances. He does not have an ideal working space and is heavily weighed down by bad debtors. The hard-working weaver is also routinely discriminated against by people who associate the blind with begging.

“I get weaving materials from Chibuwe which 160 kilometres from Mutare. I am often barred from getting into some buses because they assume that because I am blind I can’t pay the bus fare.

“They block me from entering the bus even when I tell them that I will pay my fare. Some understand but others do not want me in their buses,” Landini said, his voice shaking with frustration.

Landini, who travels to Chibuwe alone, also complained of being ripped off by some bus crews that agree to transport his weaving material.

“Some transporters wrongly assume that there is a lot of money in the crafts industry. They inflate fares when I transport back my weaving materials,” he said.

A determined fighter, Landini does not want any favours.

“What l really want from government or the city council is a working space where people can see me and which can also allow me to make and store up my crafts and materials,” Landini said.

Rebuild Sakubva director, Lucia Nkomo, who is trying her best to let the world know of the master blind craftsman, said government has a duty to help people like him support themselves.

“He is not looking for charity but an enabling environment. We hope he can at least get that from either the city council or government. We hope that this could help facilitate market access for people like him,” Nkomo said. Daily News

Hospitals in Zimbabwe run out of drugs