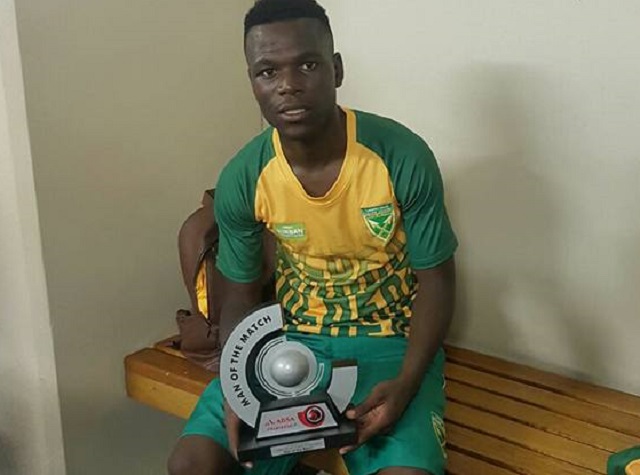 Knox Mutizwa was voted man of the match after helping Golden Arrows to a 2-1 win over Bloemfontein Celtics in a South African Premier Soccer League game in Durban on Saturday.

The former Highlanders’ striker, who is on loan from Bidvest Wits, was playing his second Premiership game since moving to South Africa in June 2016.

Mutizwa scored the winner for the Durban-based side, which is in sixth position.

In an interview with Chronicle Sport from Durban yesterday, Mutizwa said the midfield duo of countrymen Danny ‘Deco’ Phiri and Kudakwashe Mahachi has made his stay at Arrows comfortable.

Knox Mutizwa reportedly on the verge of leaving Golden…

Knox excuses self from Cosafa Cup

Mutizwa said his desire is to be a regular member of the Arrows side and score more goals.

“I’m happy that I scored and helped the team to win. I want to make my stay here count by being a regular member of the match day squad. I’ve been craving to play and I’m grateful to the coach (Clinton Larsen) who has shown faith by playing me in two games. I must also thank my teammates, especially Deco and Mahachi, who’ve made it easy for me to adapt,” said Mutizwa.

The former Bosso and national Under-23 forward made his Arrows debut last week when his side lost 2-5 to SuperSport.

In the win against Celtic, Mutizwa played the entire game alongside Phiri, while Mahachi was substituted in the 75th minute.

While Mutizwa was celebrating his first PSL goal, his Orlando Pirates countryman Tendai Ndoro was on the losing side after the Sea Robbers were mauled 6-0 by continental champions Mamelodi Sundowns.

Katsande and ex-Chicken Inn striker Edmore Chirambadare were part of Chiefs’ starting line-up, with the latter being substituted after 61 minutes.

Rusike only played 56 minutes for Maritzburg, while Blessing Moyo sat on the bench for the KwaZulu-Natal side.

Goalkeepers Tapiwa Kapini and George Chigova guarded their respective goals as their clubs Highlands Park and Polokwane City played to a 1-1 draw.

Walter Musona, who joined Polokwane City from FC Platinum during the January transfer window, lasted 65 minutes in his PSL debut.

In Belgium, striker Knowledge Musona was sidelined for KV Oostende’s 2-1 away win over Royal Excel Mouscron.

Musona was serving a suspension. Netherlands-based Warriors’ midfielder Marvelous Nakamba was on the losing end as his Vitesse side lost 0-2 to Willem II. Nakamba played 87 minutes. The Chronicle

Swipe scam barmen out of custody

Knox Mutizwa reportedly on the verge of leaving Golden Arrows

Knox excuses self from Cosafa Cup