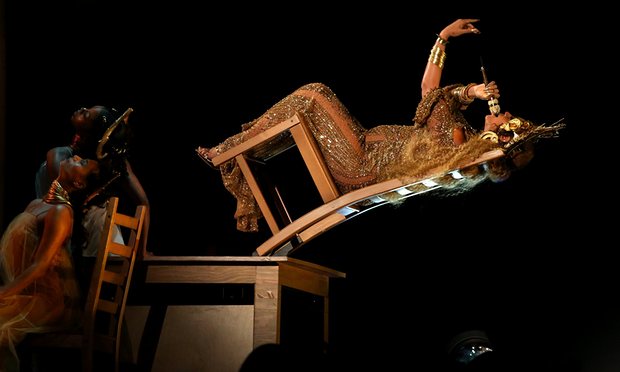 Adele reluctantly accepted the top Grammy accolades on Sunday night after edging Beyoncé’s Lemonade out for album, song and record of the year.

Her wins at the 59th annual Grammy awards in Los Angeles came after Adele repeatedly apologized for having to restart her tribute to George Michael during the show. She nearly apologized again after receiving the album of the year for 25.

“I can’t possibly accept this award,” Adele said, while using superlatives to describe how “monumental” Beyoncé’s Lemonade was.

“All us artists here adore you,” she said to Beyoncé, who was in the audience. “ You are our light. And the way that you make me and my friends feel, the way you make my black friends feel, is empowering. And you make them stand up for themselves. And I love you. I always have and I always will.”

Forbes rich list: Which celebrities earned the most over the…

Adele walked off the stage having won all five of the awards she was nominated for. Her wins came at the end of a politically charged ceremony where rapper Busta Rhymes referred to Donald Trump as “President Agent Orange.”

After a night of hurried political statements, A Tribe Called Quest delivered a vigorous rebuke to the new presidential administration during a tribute to Phife Dawg, who died in March 2016. The group said the performance of We the People was also in honor of protesters.

The hip-hop group was joined by Rhymes who thanked “President Agent Orange” for “perpetuating evil in the United States”. The tribute ended with people of different races gathered on stage as Q-Tip repeatedly shouted: “Resist” as the camera faded to commercial.

Their performance was matched in intensity only by Beyoncé, who woke up a sleepy show with a lengthy spoken-word introduction that boomed from the speakers as a psychedelic video of herself, and dozens of other women, played on stage.

The set was evocative of the resplendent Instagram post Beyoncé used to announce her pregnancy, two weeks before the ceremony. And the extravagance continued as she walked across a table for her performance of two tracks from Lemonade – Love Drought and Sandcastles – in a glittering gold dress.

She only won two awards – for best music video and best urban contemporary album – but for Beyoncé, the show was ultimately a family affair.

Her sister, Solange, took home the best R&B performance for Cranes in the Sky; their mother, Tina Knowles, introduced Beyoncé’s performance; and Beyoncé’s daughter, Blue Ivy, created one of the night’s best memes, dressed as Prince. Blue stole another moment in the spotlight when she wandered toward a gaggle of celebrities crowded around host James Corden in the aisle for an awkward Carpool Karaoke-themed sing-a-long of Sweet Caroline with Neil Diamond.

While accepting record of the year, Adele turned to Beyoncé and said: “You move my soul every single day, and you have done, for the last 17 years”.

Adele kicked off the show with her winning track, delivering a tame performance that must have been a sigh of relief after technical difficulties plagued her performance at last year’s ceremony.

But her relief faded fast during a tribute to George Michael, when she abruptly stopped a slowed-down arrangement of Michael’s Fastlove after singing off-key. She cursed before restarting the track.

Standing in a dramatic black gown, as images of Michael played in the background, Adele went on to complete a ballad-version of the dance tune, tears pouring down her eyes as she received a standing ovation from the crowd.

The tributes continued, when seven singers gathered on stage in spangly 70s-era outfits and era for a medley tribute to the Bee Gees, whose only surviving member, Barry Gibb, sang along in the audience.

And The Time delivered a rousing tribute to their contemporary, Prince, who died in April 2016, before Bruno Mars took the stage dressed like The Purple One for Let’s Go Crazy.

But the 2017 Grammys will inevitably be remembered most for their politics.

About 12 minutes into the ceremony, J Lo set the tone before presenting an award. “At this point in history, our voices are needed more than ever,” she said, before quoting from an essay Toni Morrison wrote after the re-election of George W Bush.

Shortly after, Paris Jackson referenced the Standing Rock protests: “We could really use this kind of excitement at a pipeline protest, guys #NoDAPL.”

There was a lull in political messages for nearly an hour, until Katy Perry took the stage to perform Chained to the Rhythm in a white suit, a likely homage to Hillary Clinton, who Perry ardently supported in the election. Her arm was wrapped in an armband that said “Persist” and at the end of her song, a projection of the US constitution appeared.

While accepting the award for best urban contemporary album, Beyoncé called for better representation, explaining that her album Lemonade was meant “to show images to my children that reflect their beauty” from the Grammys to the White House.

Actress Laverne Cox told the audience to search online for Gavin Grimm, a transgender teen whose legal challenge to use a gender-conforming bathroom could end up in the supreme court.

And on the red carpet, Schoolboy Q, nominated for best rap performance and rap album, was spotted dressed in a bright pink sweatshirt that read: “Girl Power.” He brought his young daughter, who wore a matching suit, to the show.

Even the National Academy of Recording Arts and Science president, Neil Portnow, made a political declaration, celebrating music for bringing people together in scary times and asking the president to support the arts.

Amid the left-leaning statements, one artist seemed to declare her support for the Trump administration.

Singer Joyce Villa, known for attention-grabbing Grammys garb, wore a blue, bedazzled dress emblazoned with Donald Trump’s campaign slogan: Make America Great Again. She explained the decision in an enigmatic Instagram post of her heart-shaped clutch, where she wrote: “My whole artistic platform is about LOVE!”

Another notable wardrobe decision came courtesy of Twenty One Pilots, who won the best pop duo or group performance for Stressed Out. They fulfilled their lifelong dream of winning a Grammy by removing their trousers before walking on stage. “Anyone from anywhere can do anything,” said lead vocalist, Tyler Joseph.

Before Sunday night, Bowie had won two Grammys in his five-decade career: a 1999 lifetime achievement Grammy and a 1985 Best Music Video award for Jazzin’ for Blue Jean.

His son, Duncan Jones, tweeted: “So proud of you dad! Would hold you up forever”.

It was also big night for Chance the Rapper, who won best rap album for Coloring Book, beating his mentor Kanye West. His wins began before the show, when he won best rap performance win for his song No Problems, recorded with Lil Wayne & 2 Chainz,in the pre-ceremony. He then won the first award of the official ceremony, best new artist. “Glory be to God. I claim this victory in the name of the Lord,” Chance said while accepting the award.

He performed No Problems towards the end of the night, showcasing his rapid-fire rhymes. Most of the show’s 84 awards were handed out before the ceremony, allowing time for dozens of performances featuring, at times, unlikely duos like Lady Gaga and Metallica, who were troubled by technical difficulties including a broken microphone.

Others performed their established hits, including Ed Sheeran’s Shape of You and the Weeknd and Daft Punk’s I Feel It Coming and Starboy, which they performed on an iceberg-themed stage. The Guardian

Tichaona Zindoga was right : Mutasa and Gumbo are just dwarfs in large robes

Beyonce is being sued for ‘Formation’