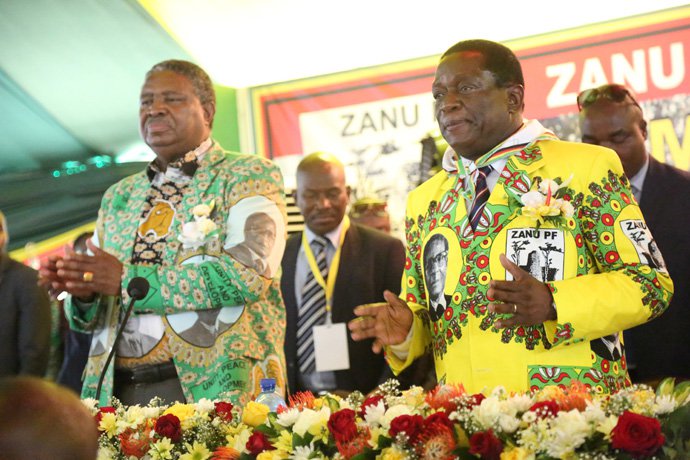 Mphoko was in the area to try and garner support for party candidate Beauty Chabaya but was met with a low turn-out which could not even be boosted by the hiring of popular Dendera music chanter Sulumani Chimbetu to perform at the event.

The boycott was allegedly sponsored by youths aligned to Mnangagwa’s so-called Team Lacoste who felt Mphoko’s visit to the area countered similar efforts placed by Mnangagwa earlier during the month.

“We know what these factionalists are trying to do and for that, we are not attending that rally. How could he (Mphoko) make a visit for the same cause after his companion has done the same in a short while? What is he trying to prove?” a Zanu PF youth was overheard saying before the rally.

Mphoko, it has further been said, failed to pull half the crowed Mnangagwa had on his visit.

Angry Team Lacoste loyalists have threatened a “bhora musango” opting to vote for Zim PF candidate, Kudakwashe Gopo who they say is a person they have seen his growth in the revolutionary party.

Reports however say factional wars ahead of the poll emerged on the primary elections when the G40 faction allegedly rigged in favour of Chabaya at the expense of Team Lacoste’s preferred candidate, Elias Musakwa.

During the recently held Bikita rally, Mnangagwa confirmed he did not know Chabaya until Zanu PF Political Commissar, Saviour Kasukuwere brought her name forward as their candidate for the by-election.

“The plan by G40 is to get Chabaya in power and later on pass on the button for Jeppy Jaboon who is out of favour in his constituency in 2018. In return, Chabaya has been promised a sit in the women’s quarter.

“It is also the sole reason why Jeppy is supporting Chabaya a lot so that he also becomes visible in the constituency in preparation for 2018. So basically, all this happening has angered a lot of youths who are against G40 politicking antics and thus agreeing not to attend Mphoko rally,” added a senior Zanu PF official.

“This has been a successful event for us in the province because it has amplified our campaign for the oncoming election. Those who are talking bad about this event are destroyers who do not want to see us prosper as a party but we will soldier on as we have always done,” said Matuke.

Added Zanu PF candidate for Bikita West by-election, “All they are saying about me is opposition propaganda. No one stands competition against me.”

In his address, Mphoko however pleaded with locals to vote for the Zanu PF candidate but avoided making any post-election promises for fear of being labelled a liar.

“I do not have much to say today but just to say please vote for Chabaya. I will also not give any electoral promises as that would make people label me a liar,” Mphoko said before turning to addressing people in Ndebele which many attendants said could not understand.

The Bikita West by-election seeks to replace Munyaradzi Kereke who was jailed for rape.

Six candidates are lined up to battle for the vacant seat.