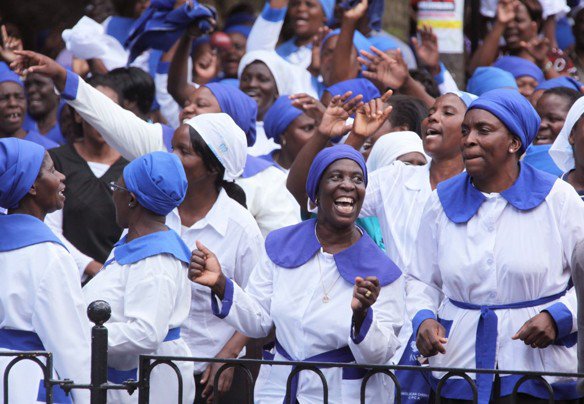 A resulting feud between supporters and non-supporters of the bishop has broken out, taken control of the parish and is now threatening to tear the, already fragile, diocese apart.

Church members have, via whatsapp, called for the expulsion of both Ruwona and the lady involved, Portia Magada, accusing the bishop of failing to execute his duties in the Anglican Manicaland Diocese.

Worshippers have also appealed to the Zambia based Archbishop of the Church of the Province of Central Africa, Archbishop Albert Chama and the Episcopal Synod of the Anglican Church to intervene in the matter on their behalf.

According to whatsapp messages seen by this journalist, members of the congregation accused Ruwona of protecting and favouring his alleged mistress.

Magada is viewed as having taken control of the church and of greatly affecting the day to day running of both the St Agnes church and the diocese.

The whatsapp messages read as follows: “Dear brethren in Christ, Anglican Diocese
of Manicaland CPCA. It was a shame and still a shame to our diocese because it went into the hands of Ruwona. The diocese has not taken a rest ever since Bishop Julius Makoni resigned. Julius was even better than Ruwona.”

“Ruwona is a satanist and an adulterer who is abusing his wife by torturing her emotional because of Portia Magada. Magada has caused more problems in the church. The relationship between Ruwona and Magada began long ago and now he has become her permanent boyfriend. People in this diocese did not vote for Ruwona but there was corruption.”

“As people from the diocese of Manicaland we no longer want Ruwona and Magada in our diocese. We will fight until justice prevails,” read part of the message.

When asked for his comment, Ruwona referred this journalist to diocesan secretary Ashel Mutungura.

Mutungura said: “The people making these claims should provide evidence to substantiate their claims. These are just church fights. So what?  Why should you write about things that you do not have evidence of? Bring the evidence first.”

When contacted for comment Magada said: “What is there to comment about. I also have those messages and they are there for the whole world to see.”

As regards the rumours that Muwona allowed Magada to buy his house furniture worth $26 000 using church funds and without receipts, Mutungura responded: “This is not true. The amount used was only $3 500 and all receipts are available for audit purposes.”

Mutungura is on record describing disgruntled congregation members at St Agnes Church as people loyal to erstwhile former Bishop Elson Jakazi who were bent on causing confusion in the church.

Jakazi is a former bishop of the church who was fired by the Anglican Church of the Province of Central Africa (CPCA) for misconduct. A protracted court battle ensued between Jakazi and the CPCA resulting in him being ouster by the courts.

Bishop Makoni took over the reigns in 2012 and resigned in 2015. The Zimbabwean

Political violence in Zimbabwe starts from the top

MDC official dies in mine shaft