Zimbabweans trying to cross a flooded Limpopo River were among five people who died in an incident that saw five others being rescued, South African media reported yesterday. 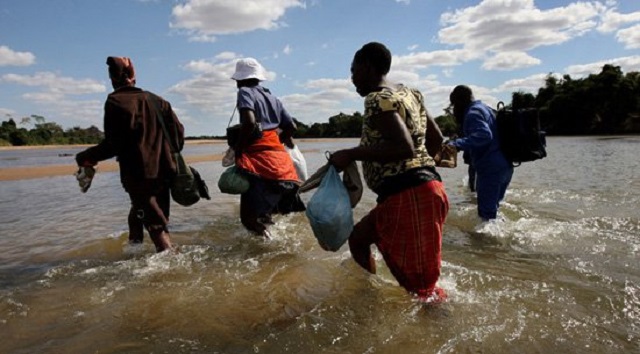 News24 reported that bodies of two men were found in the Limpopo River near Beitbridge, while two women and three girls, aged between six and 10, were rescued in the same area on Thursday and Friday.

“It’s suspected that they attempted to enter the country illegally when they became trapped by the rising river,” News24 quoted Limpopo provincial police spokesperson Brigadier Motlafela Mojapelo as saying.

Those who died or were rescued have not been identified.

The women and children received medical attention before being handed over to South African Home Affairs officials.

Former VP Mphoko’s trial deferred as lawyer is involved in…

With rains continuing to fall, the Limpopo police spokesperson warned people to be extremely careful when crossing rivers or streams, whether by foot or in a vehicle.

“The water on top might seem as if it’s flowing smoothly, but the strong current underneath can sweep away a person or a vehicle with ease,” warned Brig Mojapelo.

The Government has previously warned people against crossing into South Africa without proper travelling papers or through undesignated points.

Vice President Phelekezela Mphoko has also previously told young people to concentrate on their studies and shun the habit of travelling to South Africa illegally, saying there was nothing for them but death in the neighbouring country.

VP Mphoko, a former ambassador to South Africa, said he was speaking from experience as he had come across cases of young boys and girls who left school and ended up being exploited as sex slaves and homosexuals in South Africa.

“Don’t think there’s life for you across the border. In these books is where your life is, there’s nothing for you there. Concentrate on your education and not crossing to South Africa illegally,” said the VP.

“You pay omalayitsha between R1 000 to R1 500 to cross illegally. Those who don’t have the money, if you’re a girl, omalayitsha – upon reaching South Africa – will detain you at their house and tell their friends that they’ve a young girl.

“They’ll hire you out to their friends and by the time they recoup their money, you would have fallen sick and come back home in a coffin carrying flowers on your chest.”

The South African news channel said police divers on Saturday recovered the bodies of three boys who had drowned in ditches filled with water in the Giyani and Mankweng areas.

Search and rescue officials also saved a man who became trapped in a swollen river in the Dennilton area.

“The man was clinging to a tree in the fast-flowing river for a few hours before he was successfully brought ashore,” Brig Mojapelo said. The Chronicle