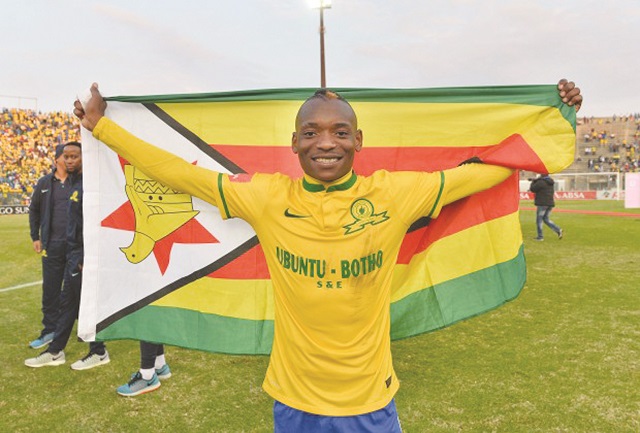 Talented forward Khama Billiat sealed his place in Zimbabwean football folklore last night when he was named the second best Player playing on the continent at the CAF Glo awards in Abuja last night.

At a glittering ceremony where the Confederation of African Football rewarded individuals and teams who excelled in 2016, Billiat added to his individual accolades by coming second in the African Footballer of the Year category.

The 26-year-old Mamelodi Sundowns midfielder had already bagged the South African Premiership Footballer of the Year, Players Player and Kick Off Footballer of The Year awards going into last night’s awards.

Billiat was shortlisted together with his Sundowns teammate and Ugandan goalkeeper Denis Onyango who took the accolade and Zambian skipper Rainford Kalaba.

Zimbabwe’s Mighty Warriors were also nominated for the Women Team of The Year award.

Khama Billiat grabs a brace of assists to inspire Kaizer…

Mamelodi Sundowns loan out Divine Lunga back to Golden…

Khama Billiat back in full training… named in squad…

But the spotlight was on Billiat who not only inspired Sundowns to Champions League glory but also led the Warriors to the African Cup of nations finals scoring three goals in the campaign in which Zimbabwe were the only team from Southern African too qualify for the showpiece. The Chronicle

Bosso not in a hurry to appoint CEO

Mamelodi Sundowns loan out Divine Lunga back to Golden Arrows