The king of a region in Uganda has been charged with murder after clashes with security forces over the weekend in which at least 87 people were killed. 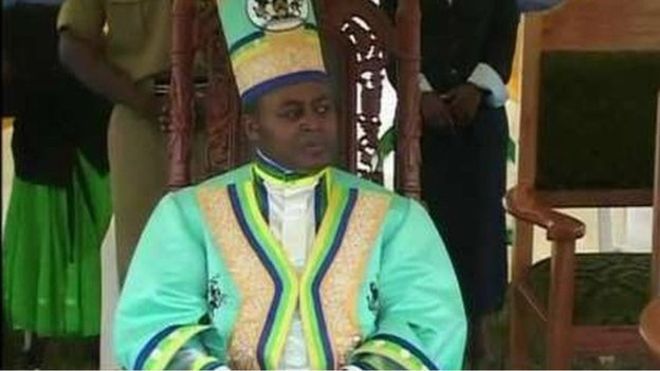 Charles Mumbere was detained after government forces raided his palace in the Rwenzururu region on Saturday.

The authorities accuse him of launching a secessionist movement to create a new state, to be called Yiira.

The murder charges relate to the killing of a police officer in March, not to the unrest over the weekend.

King Charles has denied any involvement in the violence.

Murder accused soldier to be kept in isolation

Uganda’s Rwenzururu King Charles Mumbere to get own…

At least 16 police officers and 46 royal guards were killed in the clashes in Kasese district, according to official figures.

Human rights campaigners are urging an independent investigation into the violence after pictures emerged of bodies dumped with hands tied behind their backs.

The government denies carrying out extrajudicial killings in the region.

Questioned about the raid, Gen Jeje Odong, Uganda’s minister for internal affairs, said: “What happened is a situation of self-defence.

“What do you do if I come to you, wanting to pierce you with a knife? Do you allow me to do it? Or you try to protect yourself?”

The Rwenzururu kingdom is around the mountains of Rwenzori, about 340km (210 miles) west of Uganda’s capital, Kampala.

Its people, the Bakonzo, straddle both Uganda and neighbouring Democratic Republic of Congo.

Tension has been high in the kingdom in recent years, with issues ranging from land disputes, to bitter divisions over plans to divide up Kasese – one of the seven districts in the Rwenzori region.

The king and some of his supporters have been accused of launching a secessionist movement, which authorities blame for a recent spate of attacks on security forces in the area.

Traditional kingdoms, which are barred constitutionally from taking part in national politics, were abolished in 1966 but then restored by President Yoweri Museveni in the 1990s.

President Museveni did not officially recognise the Rwenzururu kingdom until 2009, though this has not brought an end to the periodic unrest.

Before becoming king, Mr Mumbere spent many years living in the US, where he worked in a Pennsylvania nursing home. BBC News

Murder accused soldier to be kept in isolation