Celebrities have been reacting to the election of Donald Trump as US president, with many in show business shocked at the outcome of the vote. 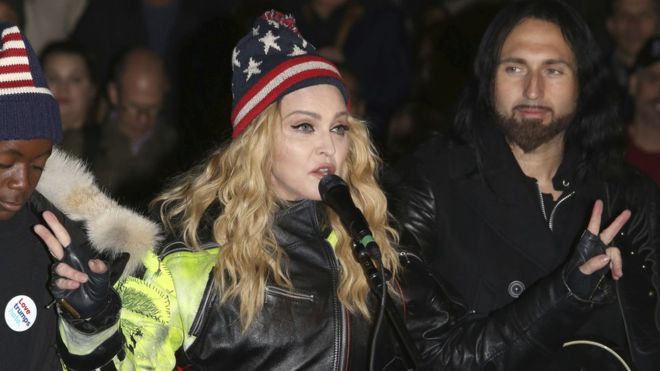 Singer Cher said “the world will never be the same”, while pop star Ariana Grande said she was “in tears”.

Others remained more upbeat, with Madonna tweeting: “We never give up”.

But his supporters were celebrating, including actor Stephen Baldwin, who tweeted that he was “proud to have been part of such amazing history”.

US Supreme Court allows release of Trump tax records to…

And actress Stacey Dash, best known for the film Clueless, another Trump fan, said: “America will be great again.”

However, those celebrities were in the minority.

Parks and Recreation actress Rashida Jones said it was a “dark day”, while fellow actress Christina Applegate said she was “heartbroken”.

Clinton supporter Lady Gaga wrote: “In a room full of hope, we will be heard. @deray #blacklivesmatter Stand up for kindness, equality, and love. Nothing will stop us.”

She had made a pledge for unity at a Clinton rally in North Carolina ahead of the election, while Madonna played an acoustic concert in New York in a bid to drum up support for Clinton, performing a cover of John Lennon’s Imagine.

Singer Katy Perry, who had also campaigned for a Clinton victory, wrote a series of Tweets, including one saying: “We will never be silenced. #LOVETRUMPSHATE.”

Rapper Macklemore wrote on Instagram: “I am disappointed, shocked and shaken at my core by what has transpired tonight.”

Actress Mia Farrow tweeted: “We must continue to stand for equality, our freedoms, for science and justice.”

Canadian novelist Margaret Atwood struck a more philosophical note, writing: “Dear Americans: It will be all right in the long run. (How long? We will see.) You’ve been through worse, remember.”

There was also British reaction, with comedian Dawn French looking to the future, saying: “Michelle Obama for next president.”

In reply to a question asking how to “move forward”, Harry Potter author JK Rowling wrote on Twitter: “We stand together. We stick up for the vulnerable.”

Singer Lily Allen wrote a series of messages on Twitter, including one saying: “Globalization is destroying democracy and the US just voted a man who built and named a golden tower after himself to live in, as president.”

Comedian and writer David Walliams said of Trump: “Those who voted for him will bitterly regret it.”

What’s next for Trump, the Republican Party and Biden?