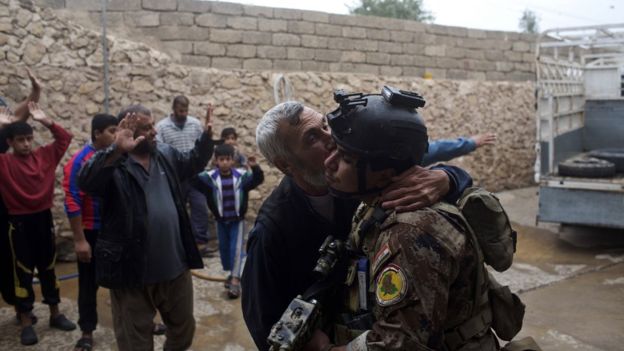 Militias involved in driving so-called Islamic State (IS) out of Mosul have been carrying out revenge attacks on men and boys in nearby villages, Amnesty International says.

The group says people suspected of having ties to IS have been publicly humiliated, tortured and beaten.

Iraq’s special forces paused in their advance on eastern districts of Mosul on Wednesday to comb the streets for any remaining IS fighters.

Meanwhile IS released audio purportedly from its leader Abu Bakr al-Baghdadi, calling on its fighters to hold their ground and fight against the “enemies of God”.

France claims capture of senior IS figure in Mali

Wednesday was the 17th day of an operation to re-take the city. The Iraqi army is working alongside Kurdish Peshmerga fighters, Shia militias and Sunni Arab tribesmen, with air and ground support from the multinational coalition against IS.

It is the Sunni tribesmen – specifically the Sabawi Tribal Mobilisation – who are alleged to have been involved in revenge attacks over the past couple of weeks, as they move through liberated villages.

According to reports from witnesses interviewed by Amnesty, some suspected IS sympathisers were put on display inside poultry cages in the middle of a roundabout.

A fighter made each of them leave the cage in turn, saying: “what are you? Say you’re an animal, say you’re a donkey.”

Other fighters, who witnesses said had no visible commanders, arrested dozens of people, beat one man’s face with cables, tied suspects to car bonnets and drove them through villages, held people in abandoned homes and handed a group of detainees bearing marks of torture to the Iraqi armed forces.

Lynn Maalouf from Amnesty said there was a “dangerous culture of impunity in which perpetrators of such attacks feel they have free rein to commit crimes and go unpunished”.

She said: “Only those legally sanctioned to detain and interrogate suspects must be allowed to do so. The authorities must rein in the tribal militia fighters responsible and bring them to justice in order to prevent such crimes being repeated in the ongoing Mosul offensive.”

The Iraqi army has been trying to consolidate its most recent gains in the offensive by combing the streets of the recaptured Kukjali district for any remaining IS fighters.

A BBC journalist says they are moving with caution, amid fears of ambushes, secret tunnels and booby traps.

The military says that six IS fighters were killed inside a tunnel during the operation.

The BBC’s Ian Pannell, who was travelling with them, says those militants who chose to stand and fight were killed while others fled deeper into the city.

About 1.2 million civilians live in the city. The Norwegian Refugee Council aid agency has warned that their lives are “in grave danger” due to the fighting.

Some have fled to a camp for internally displaced people, east of Mosul.

On Wednesday a senior CTS officer told the Associated Press that troops were moving from house to house to ensure the safety of civilians, while waiting for reinforcements before attempting to push closer to the city centre.

There are thousands of IS fighters in Mosul. BBC News

US election 2016: Obama warns fate of world at stake

France claims capture of senior IS figure in Mali