It never rains but pours for former Politburo and Cabinet minister, Webster Shamu, as his determined attempts to make a dramatic comeback keep failing. 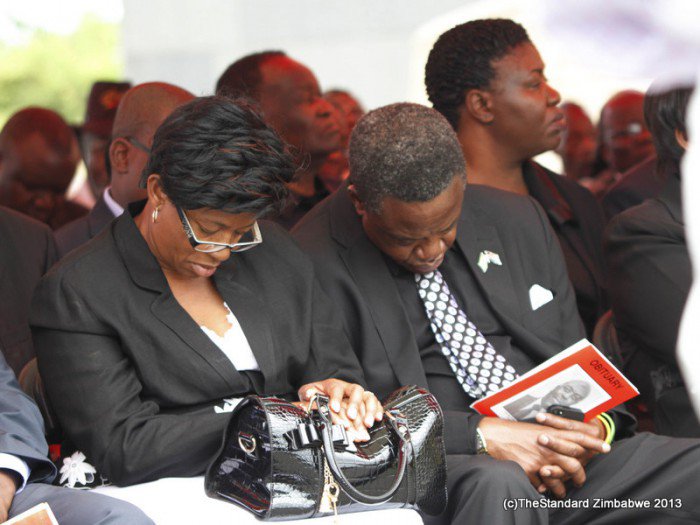 Last Thursday, at a ZANU-PF rally at Kent in Norton where Vice President Phelekezela Mphoko had gone to drum up support for ZANU-PF’s Norton by-election candidate, Ronnie Chindedza, Shamu was left licking his wounds.

Shamu and his wife’s attempts to join in the proceedings in the briefing room where the party’s leadership, led by Mphoko, were having a working lunch, hit a snag after they were ordered out.

NUMSA calls for region to intervene in Zimbabwe’s…

In shame, they walked back to their car where they had their own packed lunch.

To add to their mounting woes, youths operating the public address system disconnected the microphone as the former minister was about to chant the party slogan after he had sneaked to the podium.

A man famed for his excessive bootlicking during his days in government, Shamu must be feeling the proverbial “cold weather” that mercilessly hits those outside the ruling party.

Some years back, Higher and Tertiary Education Minister, Jonathan Moyo retorted: “It’s cold out there.”

This was upon his readmission into the ruling ZANU-PF party at its congress in December 2009 following years as an opposition politician.

He had fallen out of favour for his involvement in what became known as the Tsholotsho declaration, a 2004 internal political deal between some ZANU-PF cadres to prop up Emmerson Mnangagwa to land the party’s vice presidency fallowing the death of vice president Simon Muzenda in 2003.

The deal went awry, leading to many suspensions after it was declared an attempted coup on President Robert Mugabe.

Ten years later, in December 2014, the same debacle was to revisit the party when it went through one of its darkest chapters when a relentless purge of party cadres accused of supping with former vice president Joice Mujuru, led the party to lose a significant portion of its top-ranking officials.

Among them was Shamu, a man who always had a truckload of superlatives for his former boss, President Mugabe.

At one point he likened President Mugabe to Cremora, a coffee and tea creamer.

But, he unfortunately fell foul of the ZANU-PF system for allegedly working in cahoots with Mujuru’s cabal to plot against President Mugabe.

Shamu was handed a five year suspension from the party.

Some of the ousted comrades like Mujuru went on to form their own party, the Zimbabwe People First, and became actively involved in opposition politics.

But Shamu has refused to throw in the towel.

Last year, security agents ordered him and his wife who is also serving suspension from the party off the VIP tent they had sat inside at the Heroes’ Day commemorations and had to occupy empty seats in the sun, just outside the tent reserved for chefs from where they followed proceedings.

The ruling party, which controls national resources due to its control of the State, has often been the bridge between party members and their livelihoods through a patronage system that favours party loyalists.

“ZANU-PF is a feeding pan for most politicians. As long as you are connected, you get tenders. You siphon money from parastatals and cars are bought for you. When you are outside you have to make it on your own,” opined University of Johannesburg research associate, Admire Mare.

Some believe that Shamu might have a burning desire to remain relevant and stay in good books with the party’s leadership which has a reputation of ruthlessly dealing with its “wayward” children.

Party apparatchiks are known to expose former cadres’ shenanigans while they were still in the party as well as rewriting history in a bid to label them.

Analyst, Rashweat Mukundu, said Shamu may appear foolish, but he knows what he is doing.

“Shamu is allowing himself to be humiliated because he understands that most of what he owns was acquired through the party’s patronage system and he is now protecting his wealth by continuously pledging his allegiance to the party,” said Mukundu.

“It shows that many of these leaders cannot forge their own existence outside the ruling party and can allow themselves to be humiliated in a bid to protect what they have,” he added. Financial Gazette