A government spokesman said the operation was to root out “criminals” who had set fire to parliament.

Protestors took to the streets on Wednesday claiming fraud after it was announced that President Ali Bongo had been narrowly re-elected.

Some 1,000 people have been arrested, officials say.

Pirates kill one, kidnap four in attacks off Gabon capital

Internet shut down in Gabon after coup bid

In a national address, Mr Bongo said “democracy does not sit well with an attack on parliament”.

Protests and gunfire have continued in the capital Libreville on Thursday. 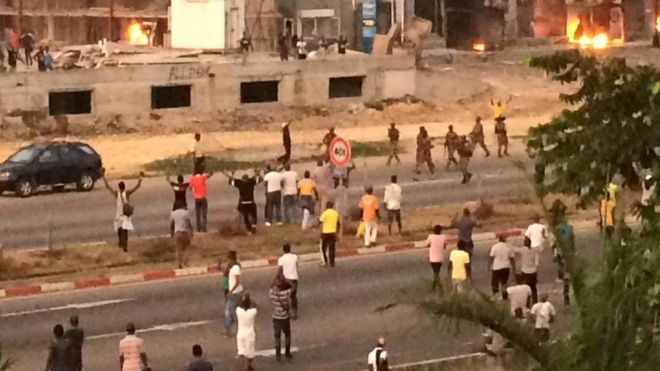 The official election result, announced on Wednesday afternoon, gave Mr Bongo a second seven-year term with 49.8% of the vote to Mr Ping’s 48.2% – a margin of 5,594 votes.

But Mr Ping said the election was fraudulent and “everybody knows” he won.

Mr Ping won in six out of nine provinces but disputes the result in Mr Bongo’s home province of Haut-Ogooue, where turnout was 99.93% and 95% of votes were for the president.

Turnout in the other provinces was between 45% and 71%, according to Gabon’s interior ministry.

Mr Ping has called for voting figures from each polling station to be made public.

The US and EU have also called for the results to be published, while UN Secretary-General Ban Ki-moon has urged calm.

Former colonial power France, which retains strong economic and political ties to the country, also said it was “deeply concerned”.

The BBC’s Charles Stephane Mavoungou reports from Libreville that on Thursday people in the capital have been unable to access the internet, including social media.

The Boulevard Triomphal, home to Gabon’s parliament, was covered in burnt-out cars and lined with torched buildings on Thursday, reports the AFP news agency.

It said police used tear gas to prevent crowds from gathering again and arrested people as they emerged from remains of the parliament.

Police chief Jean-Thierry Oye Zue said six officers had been killed in the protests but declined to give an overall casualty figure, AFP reports.

Oil-rich Gabon has one of the highest per-capita incomes in Africa, but few of its 1.6 million people feel the benefit. BBC

Mahachi out of Guinea tie

Pirates kill one, kidnap four in attacks off Gabon capital

Internet shut down in Gabon after coup bid