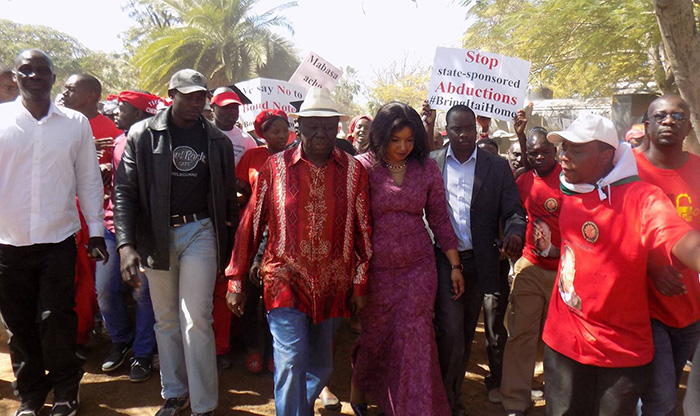 Masvingo – As Zimbabweans across the country on Monday gathered for the Heroes Day celebrations, MDC-T leader Morgan Tsvangirai recently told party supporters after a well-attended demonstration against bad governance in Masvingo that the annual holiday has lost significance.

Addressing thousands of his followers at a gathering opposite Masvingo Minister of State for Provincial Affairs, Shuvai Mahofa’s offices, Tsvangirai questioned how government was able to mark the celebration in the absence of war veterans whom he said were the major custodians of the day.

He further called on President Robert Mugabe to heed people’s growing calls for him to step down or risk squandering his liberation war legacy through continued cling to power.

“How can we go to celebrations which involve war veterans when you are busy abusing them? It’s a shame,” Tsvangirai said.

“If you are the founder of Zimbabwean independence, we want to make reference to you as a hero, the one who liberated us not the one who oppressed us. The decision is however yours to hear what the people are saying or not.”

Tsvangirai said Zanu PF must revise the system it was using to confer national hero’s status to outstanding citizens.

“Heroes liberated the nation from colonial bondage. We have also experienced the democratic struggle for the past sixteen years or so years. Those are also heroes,” he said of his party which he helped form at the turn of the century.

Meanwhile, many people in the poor province on Monday shunned the provincial heroes day celebrations with some expressing discontent over former finance minister Samuel Mumbengegwi’s denial of the highest honour of the land.

Mumbengwegwi, who was a full time senior lecturer at Great Zimbabwe University, died 14 June this year through illness.

Added Tendai Mugwagwa, a local, “I see no need to. I should not waste time going to dine with those with full stomachs when am hungry.

“We actually do not know what makes one a hero after what happened to Mbengegwi. These are simple Zanu PF parties. We are forced to donate towards such days so that they eat out of troubled citizens. I don’t want to be part of the rot.” Radio VOP

No riches, but respect for Zimbabwe soccer team at Olympics