President Robert Mugabe’s Finance Minister Patrick Chinamasa has admitted that Zimbabwe is broke. ‘Right now we have nothing’, he said on a visit to France to beg for money. Asked in an interview with Radio France International how much credit he was looking for he said ‘there is no limit’. 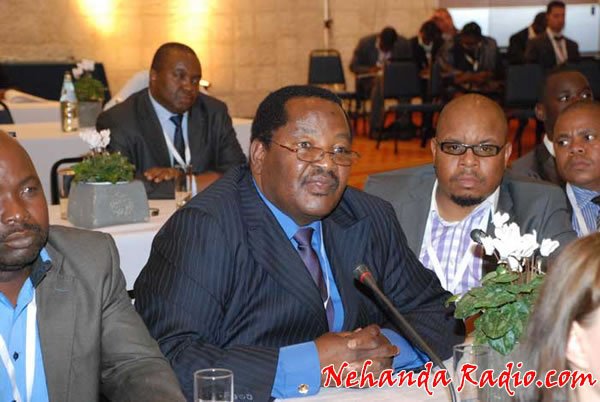 Chinamasa was in Paris on his way to London where he will speak at the Chatham House foreign relations think tank on Monday. The Vigil has sent the following notice to its supporters:

Zanu PF are descending on London in a desperate plea for money. Please come and join the Vigil in two demonstrations.

Chinamasa will talk about Zanu PF’s economic agenda and no doubt promise to stop looting, act against corruption and observe the rule of law. The Vigil and ROHR will hand out leaflets to people attending explaining why Zanu PFcannot be believed.

The Vigil and ROHR are picketing the conference at which Zanu PF will try to persuade the world that it is reforming and should be bailed out with Western loans. We are being joined by the MDC in the UK. We will be outside the meeting to tell any prospective investors the real reasons why Zimbabwe has run out of money and why the world should be sceptical about any assurances given by the likes of Chinamasa, Minister of Macro Economic Planning and Investment Promotion Obert Mpofu (unaccountably one of the richest men in Zimbabwe) and Mike Bimha, Minister of Industry and Commerce. They are listed to speak at the conference along with Reserve Bank governor John Mangudya.

We will hand out the following leaflet at Chatham House:

No to Mugabe’s lies

Exiled Zimbabweans are picketing this Chatham House meeting at which Mugabe’s Finance Minister Patrick Chinamasa will try to persuade you that the ruling Zanu PFparty is reforming and should be bailed out with Western loans and investment.

He is part of a larger Zanu PF delegation touring Europe in a desperate attempt to raise money. The meeting comes as the bankrupt regime hopes to convince the International Monetary Fund that it is serious about implementing the constitution adopted in 2013.

The Zimbabwe Vigil is here to explain the real reasons why Zimbabwe has run out of money and why the world should be sceptical about any assurances given by the likes of Chinamasa.

The opposition MP Eddie Cross says Mugabe’s actions have made it clear he has no intention of observing the constitution and points out ‘the leopard that has been courting the IMF and the International Community in the past three years has not changed its spots in any way. The consequences for the country are disastrous.

They are again taking money out of our accounts and replacing it with a worthless form of virtual money. Their economic policies are destroying what little is left of a once diversified and sophisticated economy. They are clearly not going to allow a democratic election any time soon and the wholesale theft of resources by a tiny, military and civilian clique is continuing.’

We draw your attention to this recent article by the Times correspondent in Harare.

Having had triple heart bypass surgery two years ago, Stelio Haralambos, who runs a little store, ought toavoid stress. He came to what was Rhodesia in 1966 as a barber from Lesbos but switched to running a shop.

Mr Haralambos has endured a series of economic crises since independence in 1980 but nothing quite like the one now. After Zimbabwe’s currency vanished in hyperinflation in 2009, the US dollar became the official money.

But seven years later, and with the country importing twice as much as it exports since President Mugabe destroyed agriculture and industry, there is a shortage of greenbacks, so the centralbank has introduced a “multicurrency” system.

Customers entering Mr Haralambos’s store for a morning scud, Zimbabwe’s soupy traditional beer, can offer payment in up to seven currencies — US dollars, sterling, Chinese yuan, Japanese yen, Australian dollars, South African rand, Indian rupees and the Botswanan pula. In the store the day’s exchange rates will not have arrived so Mr Haralambos has to do the calculations. You can just about pick up the fibrillation of his heart from the other side of the scratched old glass-topped counter.

The banks have tried to ration cash at ATMs but the daily withdrawal limit dwindles steadily. Slow, winding queues are the order of the day. It is the latest absurdity created by Mugabenomics. Other countries borrow but Zimbabwe cannot. Mr Mugabe once borrowed unsustainably and, worse, he doesn’t pay back.

Country people, who long for the days of the Zimdollar, have to deal with notes carrying Chinese or Japanesecharacters. And the township con-artists revel in the opportunity to profitfrom the confusion. It gets worse.

The central bank governor has announced that he will introduce a “bond note”, equal to the US dollar, in October. Economists are trying to find out if it will be currency, money, legal tender, negotiable instrument, treasury bill or promissory note — but the governor is not saying. The only conclusion economists can reach is that it is a piece of paper.

The reaction has been a collective nationwide, “No.” The bond note is seen as a government attempt to solve the cash crisis by issuing another form of the Zimdollar, whose value will plunge instantly on appearance. No one has forgotten the instant impoverishment caused by hyperinflation as the value of hard-earned wages, income and investments shrank. Police do their best to boost national outrage.

They have become a force of uniformed highwaymen. Anywhere you go, you risk being stopped at a roadblock. On the 275-mile stretch between Bulawayo and Victoria Falls last week, there were 16. At each one police search for faults to fine you — for not having the latest stamp on your fire extinguisher indicating its last service, for example. Zimbabwe must be the only country where you can be fined $20 for a dirty car. I hide my cash so I can say that I can’t pay.

Government coffers are nearly empty. Civil servants’ paydays have been repeatedly postponed since late last year and the 40,000-strong army, as well as the police and prison service, were told last week that paydays had been pushed back by two weeks.

This week the government was due to present its plan to repay $1.8 billion to the International Monetary Fund, the World Bank and the African Development Bank, which would, theoretically, have allowed Zimbabwe to start borrowing again.

However, Algeria, which was to have lent $1 billion, has backed off. Not that Mr Mugabe seems to care. He said last week that the cash crisis, “is a temporary problem which should be behind us soon”.

Mr Haralambos would best be advised to retire to Lesbos.’

Don’t prop up the Mugabe regime

For latest Vigil pictures check: http://www.flickr.com/photos/zimbabwevigil/. Please note: Vigil photos can only be downloaded from our Flickr website. For videos of Vigils and other events, check the ROHR facebook page: https://www.facebook.com/www.rohrzimbabwe.org/videos?fref=photo.

FOR THE RECORD: 43 signed the register.

‘No complainant against Wizkid’