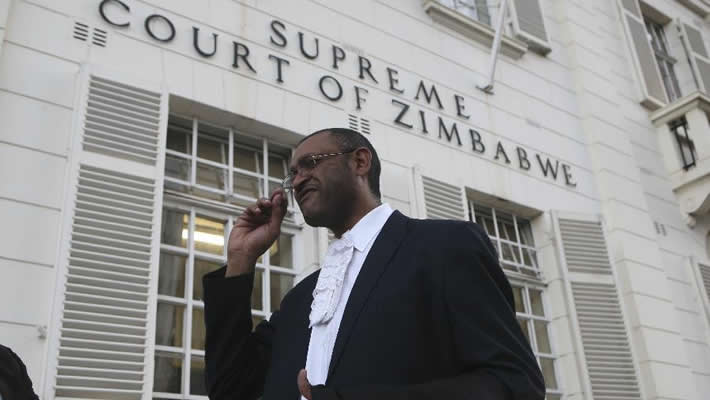 An estate dispute between two surviving wives has raised questions in the Supreme Court on what constitutes a marriage, a case that is likely to spark debate about the country’s marriage laws.

This follows a case in which a woman abandoned her lawful husband for 23 years and got married twice. Ella Munjeri, whose marriage to the third man still subsists, now claims to be the only surviving spouse of the late Bookwet Jonathan Munjeri.

She was declared the surviving spouse in the High Court. Ella prevailed in the lower court because the judge accepted her claim that she was still married to the late Bookwet Munjeri in terms of the monogamous marriage at the time of his death.

But Supreme Court judge Justice Tendai Uchena, who presided over a chamber application for condonation of the late noting of an appeal, raised questions over Ella’s conduct.

“The way she conducted herself prior to his death, and after she registered his estate, tells a different story,” he said.

Justice Uchena allowed the application by the executor, Ms Patricia Darangwa, acting for the late Juliet Munjeri who was Bookwet’s third wife under customary law marriage.

The other surviving spouse is Gladys Gweshe who is cited in the case as the fifth respondent. Justice Uchena concurred with Advocate Garikayi Sithole who was acting for Ms Darangwa that the case should proceed on appeal considering the circumstances around the dispute.

“I am satisfied that this case should be allowed to proceed on appeal and for its importance as it raises serious questions on whether a spouse who abandons or divorces the other for 23 years, and thereafter gets married to two other spouses, can on the death of the abandoned/divorced spouse claim to be the deceased’s surviving spouse and inherit the abandoned/divorced spouse’s estate,” said Justice Uchena.

Ella, who was being represented by Mr Sikhumbuzo Mpofu of Munangati and Associates, abandoned Bookwet between 1979 and 1980 and married a Mr Mupfumira with whom she had a daughter.

That union was terminated in 1985.

It was succeeded by her marriage to Mr David Dzvova with whom she is staying and has children with.

After the death of Bookwet, Ella registered his estate as the sole surviving spouse, but abandoned her claim when the late Juliet Munjeri sent an affidavit to the Master of the High Court challenging her status.

Subsequent to Juliet’s affidavit, Ella waived her rights saying she was no longer interested in the estate. She communicated this in writing to the Master of the High Court after she was invited to edict meetings.

Thereafter, the late Juliet Munjeri registered the estate and administered it until its distribution account was confirmed by the Master of the High Court on September 1, 2006.

Ella kept her silence until soon after Juliet’s death on July 13, 2013, when she resumed her claim to Bookwet’s estate.

During Bookwet’s life time, Ella wrote him letters complaining about him allowing their children to visit her at her matrimonial home with Mr Dzvova. She, on a number of occasions, reminded him of their divorce and her being someone else’s wife. She advised him to go back to court where he had been granted custody if he no longer wanted the children.

In the High Court, Justice Hlekani Mwayera declared Ella the surviving spouse on the grounds that her marriage to the late Bookwet had not been dissolved by a competent court.

“In the absence of the legally-sanctioned marriage being dissolved by a court of competent jurisdiction, the parties who made a choice to have their issues of emotions regulated by monogamous type of marriage regime remained so married,” she said.

Justice Mwayera noted in her judgment that both Bookwet and Ella were living in adulterous relationships. They did not formally divorce up until the time of Bookwet’s death. She said it was clear from documents filed of record and submissions, that the marriage between Ella and Bookwet was contracted first before the subsequent customary unions.

The situation which obtained until the death of Bookwet, Justice Mwayera ruled, did not bring the marriage under the general law at the same footing with the customary marriages for inheritance purposes. The Herald

Minister ‘covered up’ mine deaths