Four men from Bulawayo have been arrested in connection with the brutal murder of Air Zimbabwe public relations executive, Shingai Dhliwayo, who was killed in Botswana last month. 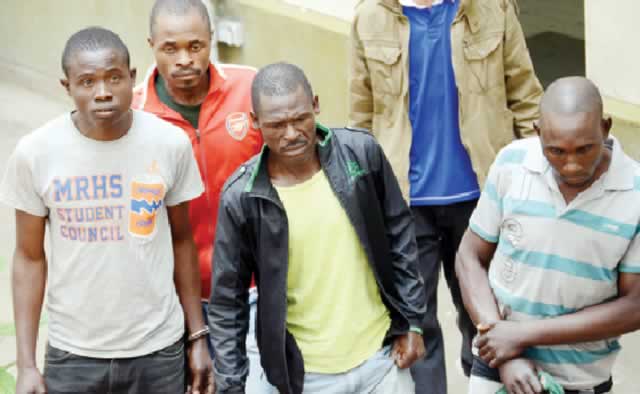 The four – who have criminal records in Zimbabwe and Botswana – were picked up at various locations around the city by detectives from the Criminal Investigations Department (CID) Homicide section between Monday and Tuesday night.

Dhliwayo was found dead in a bush about 5km from Ramokgwebana Border Post on April 30. She was tied to a tree with her feet and hands bound while a piece of cloth was stuffed in her mouth.

Dhliwayo had been strangled and was bleeding from the nose when a herdboy found her body, a week after she went missing just after attending the Zimbabwe International Trade Fair.

She had travelled to Botswana on personal business intending to come back the following day, but she failed to make it back home alive.

Yesterday, a court heard how detectives swooped on three men from Cowdray Park suburb and another one from Sizinda and found the suspects with some of Dhliwayo’s personal possessions.

They were not asked to plead and remanded in custody to June 7.

Prosecuting, Jeremiah Mutsindikwa alleged that the four lured Dhliwayo to Botswana on the pretext that they wanted to hire some decoration material and services for a wedding to be held in the neighbouring country.

“Upon her arrival in Botswana on April 30, she notified the accused persons who met her. They robbed her of valuables, an undisclosed amount of cash, a laptop, electronic gadgets and a cellphone,” said Mutsindikwa.

He said the four took Dhliwayo, gagged and strangled her to death.

“The crew left Dhliwayo’s body tied to a tree trunk in a bushy area between Jackalas Village 1 and Gatswane River, about 5km from Ramokgwebana Border Post,” Mutsindikwa said.

He said the body was discovered by a Botswana national on May 7 who made a report to the police. A post mortem was later conducted at Nyangabgwe Hospital in Francistown.

“Botswana consultant forensic pathologist Doctor Mugoma concluded that Dhliwayo died due to strangulation and gagging. After a series of investigations, the four were found in possession of Dhliwayo’s grey pouch,” Mutsindikwa said.

He said Dhliwayo’s ZTE phone was recovered from Ndiweni’s wife.

“Cellphone records show Ndiweni as the person who lured Dhliwayo to Botswana pretending to be a client,” said Mutsindikwa as he opposed bail as the four are known criminals who have been arrested countless times for robbery in both Zimbabwe and Botswana. The Chronicle

Man axed to death after being caught in bed with girlfriend

Slain Airzim boss to be laid to rest today