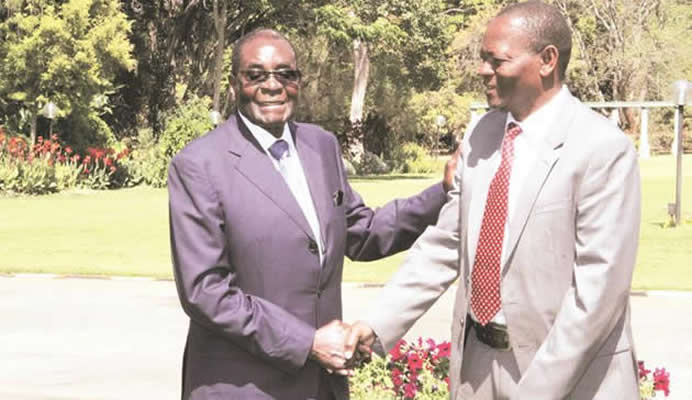 A GWANDA war veteran has been arrested for calling Rural Development, Preservation of Culture and Heritage Minister Abedinico Ncube a dog.

Ngenangaphi Ndlovu, 55, is alleged to have insulted the minister last month during a war veterans’ meeting held at Guyu Vocational Training Centre.

Ncube was not present at the event.

Cop up for rape hangs himself

Ndlovu appeared before magistrate Olivia Mashava Mashaire charged with disorderly conduct in a public place. He pleaded not guilty and was remanded out of custody to December 18 when the minister is expected to testify.

Prosecutor Teererai Mahohoma said during the meeting on November 13, 2015, at around 1PM, Ndlovu stood up and chanted a slogan in Ndebele language saying, “Phansi loAbedinico Ncube! Asikhipheni inja le (Down with Abedinico Ncube. Let’s remove this dog).”

Ndlovu, told the court that he only said “Down with Abedinico Ncube!” but knew nothing about the “Let’s remove this dog” part.

“We were at a war veterans’ meeting and I was one of those who were given the opportunity to speak. I asked why the complainant (Ncube) had chosen another war veterans’ committee when we actually have our own committee,” said Ndlovu.

“I chanted the Zanu-PF party slogan. I never said let’s remove this dog but I only said ‘Down with Abedinico Ncube!’”

Ncube said Ndlovu was among the war veterans who had questions to ask and he gave him the chance to speak. “The accused person said Abedinico Ncube is the one creating problems we’re encountering. I never heard him (accused) asking about the committee, although that was a general question which was asked by everyone,” Ncube said.

He also told the court that the war veterans’ committee was not constituted and stated that the meeting was attended by about 50 war veterans. Two police officers stationed at Guyu Police Station, Mzimazisi Nyathi, 27, and Simbarashe Maozho, 24, who were both present at the meeting, testified that they also heard Ndlovu making the utterances.

“I don’t know why he uttered those words but I believe he was angry because there were some issues which people at the meeting weren’t happy about,” said Nyathi. The Chronicle

Minister, MP in near fist fight

Bosso striker off to South Africa

Cop up for rape hangs himself