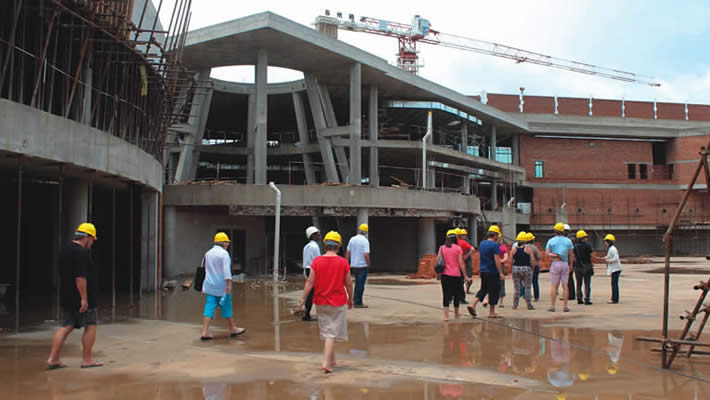 WORK on the Victoria Falls airport new terminal building and airside is now more than 80 percent complete as the Civil Aviation Authority of Zimbabwe moves ahead with plans to finish the $150 million expansion project by September.

A progress report of the project availed to Sunday Business on Thursday by Caaz showed that the terminal building was 81 percent complete while the airside was 80 percent.

Govt to install new radar as dozens of planes sneaked in…

Unmonitored airstrips to be closed

She said the fire station was 22 percent complete with the ground floor slab done.

She said the sewage pump stations were 75 percent complete.

A new water tank, added Ms Hungwe, was 99 percent and test have been completed while the contractor was connecting the tank to the existing pump station.

She said concrete had been to second level on the new water tower, which is 25 percent complete.

“Parking and internal roads excavations are 50 percent complete,” she said.

Ms Hungwe said the overall progress of the airside was 80 percent.

“Runway works are now 89 percent complete. Asphalt laying and work on the concrete pavements are complete while installation of runway lights is in progress,” she said.

Taxiways were 63 percent complete while asphalt laying on the carriageway has been completed taxiway and links A2, A4 and A5.

She said the new Control Tower and ATC building was 82 percent complete with all concrete and brick works having been done.

“Plastering is complete. Internal painting, ceiling work, and laying of floor screed is in progress. ADB installed pipes for lights on the new runway and taxiways A2, A4, A5 and C1. Concrete bases have been done for AGL substation containers, navigation and meteorological equipment which is now on site. ADB are installing cables and lights on the new runway,” said Ms Hungwe.

The Government through Caaz initiated the $150m airport expansion project in February 2013 to boost its aircraft handling capacity and tourism in Victoria Falls. The project is funded by China-Exim Bank and in being constructed by China Jiangsu International Group.

The project is also seen as testimony to the success and implementation of the country’s economic blueprint Zim Asset.

The new terminal building will accommodate around 1,2 million passengers per annum which is three times more than its existing capacity of 400 000.

“All concrete and brick works were completed as well as the plastering. Internal painting, ceiling work, and laying of floor screed are in progress and once all works on the control tower are done, test flights will begin,” said Dr Mpofu.

Airlines which include Air Namibia said the expansion and rehabilitation of the Victoria Falls airport would improve operations for airlines that were flying into the resort town.

“Air Namibia has been operating at Victoria Falls for a long time and there was a time when the infrastructure was a limitation for us. The new runway will improve our operations as it will accommodate big aircraft so if demand dictates we will be able to use big aircraft like Airbus 319,” said Air Namibia Zimbabwe representative Mr Forbes Zaranyika, adding that the expansion brought flexibility to operations. The Sunday News

Mugabe to blame for VPs fighting

Unmonitored airstrips to be closed