HARARE – Sahara TV reporters, who have been labelled Boko Haram militants by government propagandists after they cornered President Robert Mugabe in Abuja last week demanding among other issues, when he was likely to retire have mocked the 91-year-old leader over Harare’s response.

The reporters, Adeola Fayehun and Omoyele Sowore last week hounded Mugabe at the inauguration of Nigeria’s new president Muhammadu Buhari and asked him tough questions about his controversial rule.

Sahara is an online news agency that promotes citizen journalism and reports mainly on corruption and human rights abuses on the continent.

Anger over detention of Nigerian journalist

Now multimedia reporters have hit back with a cartoon by Ike Slimster with an underlying message that Mugabe cannot take on hard questions. 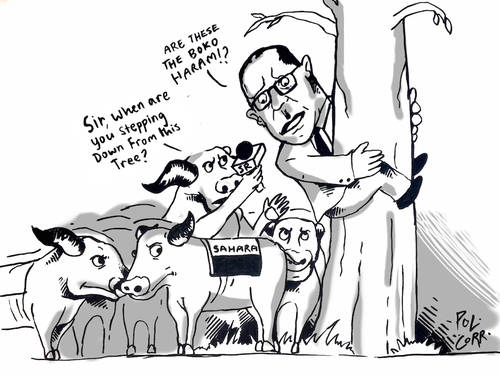 “Political Cartoon — Mugabe Runs…Robert “Bob” Mugabe isn’t used to being asked hard questions…” the banner of the cartoon reads. The cartoon portrays “Mugabe” clinging on a tree and being asked by cows bearing Sahara TV logos when he would be stepping down from the tree.

“Are these Boko Haram?” “Mugabe” asks in the cartoon.

Analysts earlier told the Daily News that while Mugabe had for a long time been seen as a hero in Africa, he now risked leaving office as a disgraced pariah as more and more people on the continent were becoming increasingly critical of him and his long, controversial tenure in office.

In the video, Mugabe is approached by the reporters and the apparently peeved nonagenarian tries to respond, but his aides tell him to get into the car while the reporters continue grilling, before they go on to hunt down South African President Jacob Zuma. Daily News

MDC hits back at Grace Mugabe

Anger over detention of Nigerian journalist