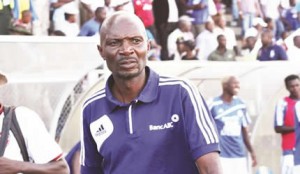 ZVISHAVANE – Dynamos coach Callisto Pasuwa teetered on the brink of being fired after his under-performing side lost 2-0 to FC Platinum who finally broke the jinx to beat the Harare giants at Mandava Stadium in Zvishavane.

Goals from Elvis Moyo and a controversial penalty from Charles Sibanda condemned Dynamos to another defeat after they were knocked out of the Mbada Diamonds Cup by How Mine only three days ago.

The latest defeat to FC Platinum was made worse by bitter rivals Highlanders firing 4 goals past Tripple B to win 4-1 and move to the top of the standings with 44 points. Dynamos remain second with 42 points the same as Harare City who have an inferior goal difference.

CAPS United meanwhile completed a double over Bulawayo side Chicken Inn at the National Sports Stadium. United handed the visitors a 2-1 defeat with Moses Muchenje and Hardlife Zvirekwi scoring the two goals. Caps United are 5th on log standings with 39 points.

Results from the midweek fixtures