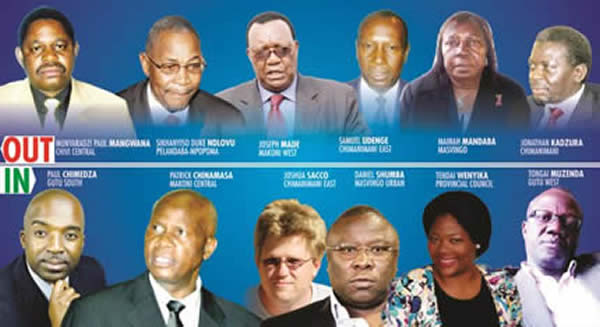 Results from most areas had been released by last night, although voting was still in progress in areas like Mbire and Bindura, while counting was on in Harare and other parts of the country.

Zanu-PF national chairman Simon Khaya Moyo yesterday said all was in order with regards to the primaries, with provincial committees expected to submit names of winning candidates today.

Winners will file their papers at Nomination Courts sitting in the capitals of their respective provinces starting at 10am tomorrow. Heavyweights who fell by the wayside include Politburo member Sikhanyiso Ndlovu, who lost to businessman Joseph Tshuma in Pelandaba-Mpopoma in Bulawayo.

Several new faces made it in Masvingo and these include Zimpapers board chairman Dr Paul Chimedza who beat lawyer Dr Vengai Guni in Gutu South.

In Masvingo West, Ezra Chadzamira won the elections after staving off the challenge of war collaborators’ provincial boss Namatirai Chivanga.

Losing candidate in the constituency Retired Major Benard Mazarire filed an appeal contesting the outcome, alleging that some people who voted were from the Midlands.

“Yes we have received an appeal from Retired Major Mazarire in Masvingo West and we will look into the issue tomorrow (today),’’ said provincial chairperson  Lovemore Matuke. Matuke was another new entrant in the province when he beat businessman Benson Dandira in Gutu Central.

Matuke said results for Bikita West where former advisor to Reserve Bank of Zimbabwe governor Dr Munyaradzi Kereke was contesting against his former workmate Elias Musakwa had been withheld, but could not disclose the reasons.

In Chivi North, sitting legislator and provincial commissar Tranos Huruva together with Clifford Mumbengegwi lost to a newcomer Retired Major Mathias Tongofa. Politburo member Kudakwashe Bhasikiti retained his ticket to represent the party in Mwenezi East after shrugging off the challenge of Pastor Chigoyi.

In Mashonaland East’s Chikomba West, sitting MP Mike Bimha retained his seat after defeating Douglas Makuku by 4 986 to 1 587. Makuku conceded defeat and promised Bimha that he would work hand in glove with him.

Beatrice Nyamupinga won in Goromonzi West, while Simon Musanhu won in Wedza North with 3 915 votes against 12 other candidates. Paddy Zhanda won Goromonzi North with 5 484 against General Charles Maredza (Rtd) who had 1 116.

Sylvester Nguni won the Mhondoro-Mubaira constituency with 3 470, while businesspersons Kennias Shamuyarira and Nyarai Chasi got 1 490 and 1 155 respectively.

In Mutoko East, incumbent  Ordor Nyakudanga lost to Ricky Mubvumbi who got 5 338 votes to his 4 687, while Logic Karimatsenga got 270.

David Chapfika won the right to represent the party in Mutoko South after he got 4 198 to beat the challenge of Edmund Jacob, Everisto Pfumvuti and Clara Mushimbo who got 775, 4 182 and 118 respectively.

In the Midlands, Dorothy Mhangami the sitting MP retained the right to represent the party in Gokwe Central after garnering 3 112 votes ahead of Cornellious Muzezi with 1 723, Victor Matemandanda with 1 178, Bornface Zijena with 569 votes and Davidson Masvisvi who polled 506 votes.

For the Senate, Jason Machaya won with 3 888 votes ahead of Themba Masuka who got 1470 votes. In Manicaland’s Makoni Central Justice and Legal Affairs Minister Patrick Chinamasa won against Arda board chairman Basil Nyabadza.

Former Harare South legislator and Deputy Minister of Energy and Power Development, Hubert Nyanhongo, will be representing Zanu-PF in Nyanga North after seeing off the challenge of  Nicodimus Antimalaria Chibvura and Maxwell Kapomba.

Bafana Dube won in Bulawayo South with Godfrey Malaba emerging winning in Pumula and Grace Dube triumphing in Magwegwe. Judith Ncube won in Emakhandeni, while Christopher Dube will stand in Lobengula constituency. Nicholas Mhlanga won the right to stand for the Luveve seat.

In other Senate results in the province, Essau Dube was unopposed and Nomusa Mthunzi went through in the women’s quota under proportional representation, in Nkayi.

Bulawayo Governor and Resident Minister, Cain Mathema was unchallenged in Tsholotsho South, while Medeline Bhebhe went through under the women’s quota in Bubi-Umguza.

Results for Mashonaland Central Province were still to be verified.

Supernatural: The Prophets vs The Winchester Brothers