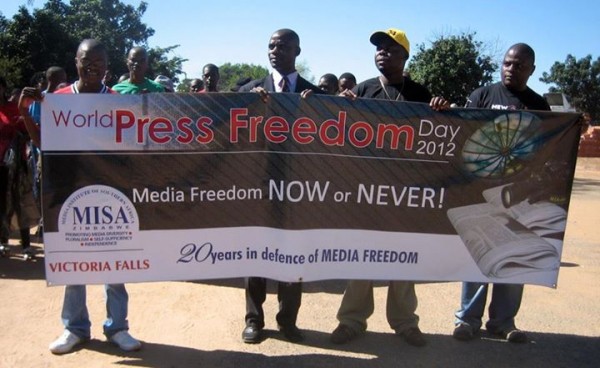 The growing number of attacks against journalists in Zimbabwe has drawn sharp condemnation from a media watchdog which described the trend as ‘disturbing’.

The remarks were made by Media Institute of Southern Africa (MISA) spokesman Nyasha Nyakunu, following reports that another journalist was kidnapped, assaulted and left for dead by unknown assailants in Chinhoyi.

The attack on Chinhoyi-based freelancer Paul Pindani brings the number of journalists attacked in June to four.

Temba Mliswa arrested again at his farm in Karoi along with…

Misa appeals to police boss for restraint when dealing with…

According to a report in the NewsDay newspaper, Pindani was abducted from his home by three masked men who took him to a shopping centre where they severely assaulted him before disappearing into the night.

Police sources told the paper that Pindani was gagged and abducted after he responded to a knock on his door at 4am Friday.

“The three assailants, who were wearing masks and work-suits, shoved a piece of cloth into his mouth and dragged him to Mt Tikwiri shopping centre about 80 metres from his house and beat him up with unknown objects before disappearing,” Inspector Clemence Mabgweazara said.

The report Monday said the journalist managed to get back to his house and narrated the ordeal to his wife before losing consciousness. He was taken to Chinhoyi hospital where his condition was said to be serious.

Other recent attacks on journalists include the one on Masvingo Mirror reporter Bernard Mapwanyire, who was reported to have been manhandled by MDC-T security staff while covering the party’s primary elections on June 8th.

On June 6th, Chronicle reporter Mashudu Netsianga was detained and questioned by MDC-T security personnel for allegedly gate crashing a meeting between Prime Minister Morgan Tsvangirai and the business community in Bulawayo.

Speaking to this station Monday MISA spokesman Nyakunu said the group will comment in detail about the attack on Pindani once it has been established who the kidnappers were as well as their motives.

“But pertaining to the other cases, we are saddened and very disturbed by such attacks on journalists. These attacks do not just put the lives of these journalists at risks but they endanger media freedom.

“We would like to reiterate our call to political parties to rein in their supporters and educate them on the critical role that journalists play in a democracy. Journalists should be allowed to operate and access news freely,” Nyakunu said.

Nyakunu said it was important that political parties were heard to condemn such attacks, especially in the run-up to elections. He said MISA will be re-engaging politicians with a view to creating an environment where journalists can do their jobs without suffering physical attacks.

In an opinion piece Friday, The Independent newspaper said attacks on reporters by supporters of all political parties were hardly surprising, given that politicians across the party divide, including Prime Minister Morgan Tsvangirai, had openly verbally attacked media personnel for doing their work.

“Tsvangirai is a courageous leader who has suffered all manner of assaults over the years. But he has not listened to the press and therefore not learnt from it. Beating up journalists is not the best way to win friends and influence people,” The Independent wrote. SW Radio Africa

Misa appeals to police boss for restraint when dealing with journalists