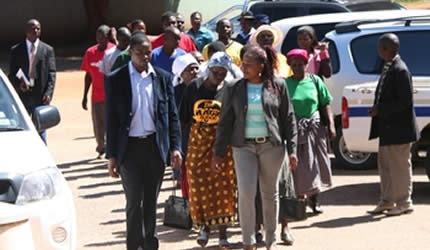 HARARE – Nineteen MDC-T activists, who were arrested in Hatcliffe last week while on a door-to-door voter registration campaign, were on Tuesday denied bail and remanded in custody to May 14th.

The state appeared not ready to proceed with the case after the police indicated to the magistrate that they were still hunting down one of the activists who they claim was instrumental in organising the campaign team.

The decision by the magistrate to deny the activists bail was roundly condemned by the MDC-T Harare province, who described it as ‘distressing.’

Spokesman for the province and the MDC-T deputy Minister of Justice Obert Gutu used the social media site Facebook to vent his anger towards the justice system in the country. He explained that the activists did nothing wrong and the criminal charges they are facing are ‘spurious, vexatious and frivolous.’

‘Once again, the MDC Harare Province would like to thoroughly and expressly condemn the notorious and neo-fascist actions of the absolutely discredited Zimbabwe Republic Police which is now effectively operating as an armed militia of the moribund and terminally ill political grouping, ZANU PF,’ Gutu said.

He said the province called for the immediate and unconditional release of their cadres who are being persecuted instead of being prosecuted, ‘by a Stalinist and brutal dictatorship which is facing a humiliating and crushing electoral annihilation at the forthcoming harmonized elections.’

Last week co-Home Affairs Minister Theresa Makone, the MP for Harare North, launched a blistering attack on the police after they arrested the group branding the actions as ‘stupid and shameful.’ SW Radio Africa