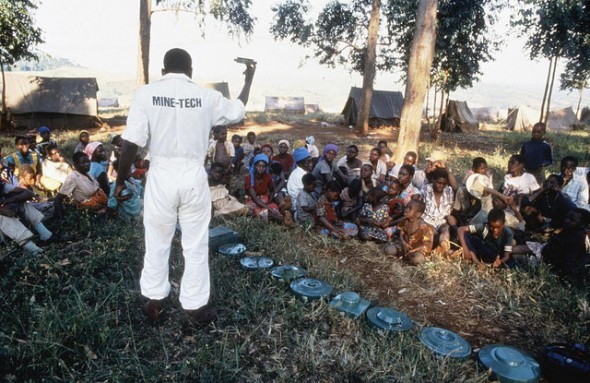 Zimbabwe is one of the most mine-impacted countries in the world in terms of area affected and density of mines.

By this measure, it compares to countries in immediate post-conflict transition periods, according to a representative of Britain’s HALO Trust, an organization dedicated to removing of the debris of war, such as mines.

“Zimbabwe has one of the densest minefields in the world, with about 5,500 landmines per kilometer. The proximity of the people to the minefields shows that it is inevitable that there will be a trickle of accidents due to the need to grow crops and herd cattle,” said Tom Dibb, a representative from the HALO Trust.

NGO removes over 50 000 landmines from Zimbabwe

Landmines claimed the lives of over 20 people in Zimbabwe throughout 2012, said Dibb, who managed mine clearance programmes in Chechnya and Afghanistan in addition to work in Afghanistan and Southeast Asia.

Despite clearance conducted by the military demining squadron, Zimbabwe still has more than 200 square kilometers of ground assessed to be impacted by landmines.

According to HALO Trust, during the Liberation War of the 1970s, Rhodesian forces laid an extensive series of minefields along the borders between Zimbabwe (then Rhodesia) and Zambia and Mozambique in an attempt to prevent liberation movements from moving in and out of the country for training and supplies.

These belts of landmines are located on Zimbabwe’s northeast border with Mozambique and extend 335km from Musengezi to Rwenya and traverse major border towns including Mukumbura and Nyamapanda.

Zimbabwe is a signatory of the Ottawa Convention, which prohibits the use of stockpiling, production, and transfer of anti-personnel mines. By January 2015, the country must produce a detailed plan of how it will achieve its Convention commitments.

Dibb said efforts to demine the country’s border are supported by HALO Trust and the Norwegian Peoples Aid (NPA).The western border in the Victoria Falls region was successfully demined by the Zimbabwe National Army.

Dibb co-presented the discussion session with two University of Zimbabwe researchers, Trust Masiya (Institute of Mining Research) and Professor Charles Nhachi (College of Health Sciences). The academics shared information about how mercury is used in gold mining and the dangers of mercury in general, as part of a public awareness program for International Mine Action Day (April 4) facilitated by Jean Phillipson of the U.S. Embassy.

The disparate topics are tied together by a common misconception that landmines contain valuable “red mercury,” resulting in people tampering with the explosive devices. Dibb and his co-presenters, researchers from the University of Zimbabwe including the chair of the Clinical and Pharmacology and Toxicology of Health Sciences, demystified the popular belief that there is mercury in landmines, stating that there is no mercury of any sort in landmines.

Early this year, five people were killed in the high-density suburb of Chitungwiza (30 kilometers south of Zimbabwe’s capital city, Harare) by an explosion. Police confirmed that a landmine caused the blast and they speculate it was in an attempt to extract this mythical red mercury which is believed to fetch value elsewhere.

Misinformation about the presence of valuable “red mercury” in landmines has encouraged people to tamper with dangerous explosive ordnances. While not present in landmines, mercury, if not used correctly, can be harmful to people and has environmental impacts.

“Exposure to mercury could cause adverse health effects,” said Professor Nhachi. “It is toxic to plants and the soil as well. When it is in its organic form, it easily penetrates membranes in the body.” He said that renal lesions are one of the symptoms of exposure to mercury, which injures the urinary system and can lead to death in the most extreme cases.

Small-scale miners continue to use mercury (not the mythical red mercury) to extract gold, a situation Masiya described as unfortunate given the health and environmental consequences that come with improper use. There are more than 400,000 people involved in artisanal small scale mining countrywide.

“Small scale miners use mercury because they believe it is the most effective way to mine gold. It is cheap and readily available; it costs about $150-$200 per kilogram; and there are no permits for purchasing the product,” Masiya said. He said most small scale miners use their bare hands to separate mercury from the gold and when smelting gold over an open fire, resulting in them inhaling the toxic vapors. – ZimPAS

NGO removes over 50 000 landmines from Zimbabwe