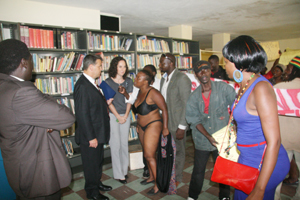 BULAWAYO – In a suspected act of witchcraft, residents of Iminyela suburb in Bulawayo yesterday woke up to find a 21-year-old woman standing at her doorsteps half naked and smeared with ashes all over her body.

The young woman was dressed in torn clothes, holding a walking stick and a plastic bag like an old woman. She was found at about 6am by residents who had come to buy firewood from her neighbour. At about 8am, stunned residents were still flocking to the house to catch a glimpse of her.

Residents said they suspected the woman was being used by the Satanist cult without her knowledge as she did not show any signs of fear when people caught her.

I will continue to strip: Sheila Mutsenhu

Woman strips in front of US envoy

“She stood in the doorsteps motionless wearing what we suspect to be the ‘witchcraft regalia’. She was wearing torn clothes, wrapped in a towel, smeared with ashes all over the body and holding a walking stick like an old woman.

“We suspect she lost track of time hence she was caught dressed like this,” said Mr Prince Chimanga, a resident. Another witness, Ms Thembelani Ndlovu said some neighbours had to drag the woman into the house so that she could dress properly.

“The woman was not aware of what was happening, she just stood on the doorstep confused. Some of the neighbours had to drag her into the house so that she could clean herself and dress properly.

“She said she was used to dressing in that way but we suspect she is being used by the Satanist cult because what we saw was blood-curdling and shocking,” said Ms Ndlovu.

Bulawayo Progressive Residents Association (BPRA), Iminyela chairperson Ms Sibusisiwe Ndlovu said there was a need for the woman’s family to cleanse her.

“I was called early in the morning to come and catch a glimpse of what was happening. The woman was dressed like an old woman in rags and looked confused.

“I suspect she is possessed by the spirits of witchcraft but she is not aware of it. I have suggested that her family take her to a church so that they can pray for her and exorcise the evil spirits using her,” said Ms Ndlovu.

The woman, Ms Ayanda Ngwenya, who had removed the clothes did not mind to dress in the alleged “witchcraft regalia” for the news crew to see and posed for residents to take pictures of her. However, she denied that it was for witchcraft purposes and said it was a prank to scare people.

“It was my first time to dress in that way in Bulawayo but I usually dress this way at my rural home in Kezi to scare people. I keep the clothes in my pillow and it is just my way of acting around in the house,” she said.

Contacted for comment Bulawayo police spokesperson Inspector Mandlenkosi Moyo confirmed the incident and said the matter had been reported to the police.

“We attended the scene but discovered that it was a personal social problem that needed to be handled by members of the family and not the police,” said Insp Moyo. There have been several reports of incidents in Bulawayo and elsewhere around the country, which residents believe are related to Satanism.

The case against an “I’ll fly away, sweet by and by” Gospel

I will continue to strip: Sheila Mutsenhu

Woman strips in front of US envoy