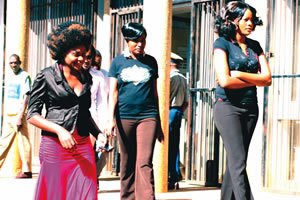 A CHEGUTU man became the latest victim of rape after he was offered a lift by women who went on to inject him with an unknown substance before taking turns to rape him.

The 42-year-old man was walking towards Chinhoyi Road on his way to Blue Rock Mine in Chegutu when an unidentified vehicle stopped and offered him a lift saying they were going to the same area. On board were two females and a man who was driving.

He turned into a dust road leading to Chegutu industrial area before one of the females that was at the back seat suddenly blindfolded him with a cloth and the vehicle stopped near Guard Alert offices.

They disembarked and the man forced him to drink an unknown substance which made him dizzy and weak. His private part became erect.

Mashonaland West police spokesperson Inspector Clemence Mabgweazara confirmed the incident, adding that investigations were still in progress while no one had been arrested so far in connection with the matter.

“We have received a report of a matter in which a Chegutu man was indecently assaulted by two women that offered him a lift after giving him an unknown substance,” he said.

One of the women forced him to lie on the ground before the man undressed him before reportedly telling him that he was going to be intimate with the two women. They took turns to have intercourse with him but according to police sources the man is not sure whether the women used condoms or not.

After the act, they warned him against telling anyone about the incident and they drove off leaving him in the secluded area and he later removed the blindfold and reported the matter to Pfupajena Police Station.

Inspector Mabgweazara urged people to use public transport as many people were losing valuables after boarding private vehicles in which some of the occupants had sinister motives.