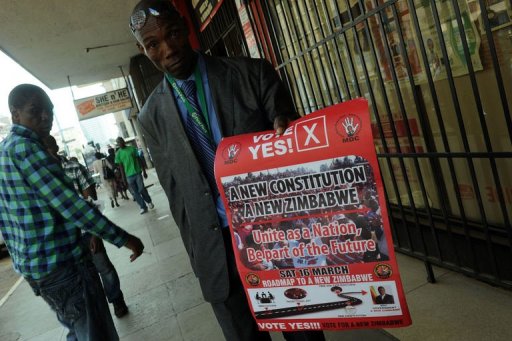 HARARE – Zimbabweans were expected to vote for a new constitution on Saturday that would clip presidential powers and pave the way for an election to decide whether Robert Mugabe extends his three-decade rule.

Mugabe, Africa’s oldest president at 89, has ruled the former British colony since independence in 1980 and has been accused of carrying out harsh crackdowns on the opposition and weakening state institutions like the cabinet and parliament.

The new constitution would set a maximum two five-year terms for the president, starting with the next election, expected in the second half of this year. But the limit will not apply retroactively, so Mugabe could rule for another two terms.

Presidential decrees will also require majority backing in the cabinet and declarations of emergency rule or dissolutions of parliament will need the approval of two thirds of lawmakers.

“This constitution is a symbol of transformation and is a loud announcement of the advent of a new dispensation. I will vote yes,” Prime Minister Morgan Tsvangirai said in a statement on the eve of the referendum.

Former opposition chief Tsvangirai went into government with Mugabe after a violent and disputed vote in 2008. He made the referendum on the new constitution a condition of the power-sharing deal and said there would be no point in holding new elections without it.

Both parties back the constitution, making Saturday’s vote almost a rubber stamp exercise. Turnout is expected to be low.

In Mbare, the oldest township in the capital that has witnessed clashes between supporters of Mugabe’s ZANU-PF and Tsvangirai’s Movement for Democratic Change (MDC) in the past, more than 100 people filed patiently into a polling station.

“It is a good constitution because now a president can rule for 10 years at the most,” said Douglas Muchena, after voting at a polling station in Avondale, just outside central Harare.

The run-up to the referendum was peaceful. Analysts say they are more worried about presidential and parliamentary elections later this year, where ZANU-PF is expected to face a stiff challenge from the MDC, although there are no reliable polls.

The period preceding previous elections since 2000 has been marred by violence, and the MDC says hundreds of its members have been killed at the hands of Mugabe’s youth brigades and independent war veterans supporters.

Tsvangirai defeated Mugabe in March 2008 but not by enough votes to avoid a second round of voting. The former trade union leader was forced to quit the run-off race after a campaign of violence by Mugabe’s supporters but regional leaders intervened to force the two rivals to form a coalition government.

Although fragile and at times acrimonious, the unity government has eased political tensions and helped stabilise an economy which shrank 40 percent between 2000 and 2010.

Mugabe wants to continue with his nationalist policies, like seizing white-owned commercial farms and taking majority shares in foreign-owned firms. The MDC says if it wins it will revive a once-vibrant economy, attract foreign investment and reduce one of the world’s highest jobless rates of 80 percent. Reuters

‘Friends of Zimbabwe’ give assessment