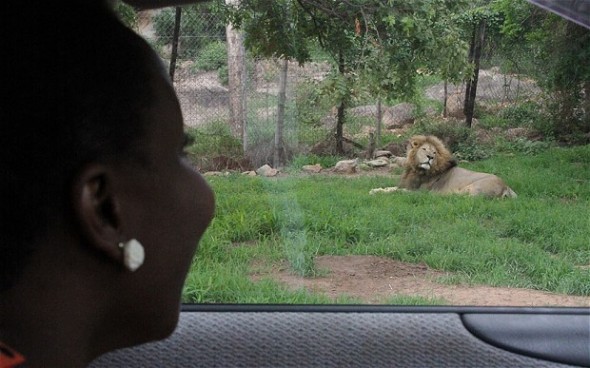 By Peta Thornycroft in Harare and Aislinn Laing in Johannesburg

Conservationists have reacted in outrage to the shooting of a wild lioness and her two cubs in northwestern Zimbabwe after they killed two local people last week.

Sharai Mawere, 43, a market stall owner, was making love to her boyfriend at a secluded spot in the bush near the northern town of Kariba when the lioness struck on Tuesday. Her lover escaped and alerted armed rangers who fired shots to scare the animal away, but it was too late for Miss Mawere. She died at the scene.

Later that day, the head and pelvis of Mashunjeni Jakiel, 77, were found near a suburb of Lake Kariba town. He had been missing since the weekend. With fears growing that the lions had acquired a taste for human flesh and would kill again, vets in Harare said they should be darted and moved to a wildlife sanctuary.

Instead, they were shot by wardens from the Department of Parks and Wildlife Authority and a professional hunter.

Johnny Rodriques from the Zimbabwe Conservation Task Force said the female lioness had a wound from a snare around her neck, and had only started attacking humans because poachers had decimated stocks of other animals around Zimbabwe’s vast Lake Kariba.

He said the three lions looking for food in an arid area close to a town was “an accident waiting to happen”.

“The lioness was wounded, there was no food for her to eat so she and her cubs were a danger, and we should have been able to dart them and transfer them across the dam to a protected area,” he said.

“We have applied to the Convention on International Trade in Endangered Species (Cites) for Zimbabwe’s lions to be declared an endangered species,” Mr Rodriques said. “Zimbabwe is now very short of lions.”

Conservationists writing in last week’s Ecology Letters journal said that wild lions are killed because they are perceived to be a threat to livestock, and competition for land and over-hunting of their prey have reduced their numbers even further.

They say that moving them in to fenced-in nature reserves could be their only hope of survival.

Dr Luke Hunter, from the big cat conservation organisation Panthera, said: “No one wants to resort to putting any more fences around Africa’s marvellous wild areas, but without massive and immediate increases in the commitment to lion conservation, we may have little choice.”

Cavan Warran, for the Kariba Animal Welfare Trust which helped arrange the lions’ shooting, said they wanted to dart and move them but the urgency of the problem gave them no time. “These lions had tasted human flesh and after consulting widely we concluded that they had to be euthanised immediately,” he said.

Mr Waran said he was just over 100 yards away from the lions when they were killed.

“We discussed darting and relocation after the first victim but when the second victim’s remains were found the vets all said they should be destroyed,” he said.

“If there was a zoo or a very controlled facility in Zimbabwe or resources and we had a day or two then perhaps we could have arranged an alternative.”

A Zimbabwean professional hunter who knows the area well told The Daily Telegraph that poaching was “out of control”.

“There is a lack of skills and a shocking lack of resources,” the hunter, who asked not to be named, said. The Daily Telegraph

Why are police persecuting Jestina Mukoko?