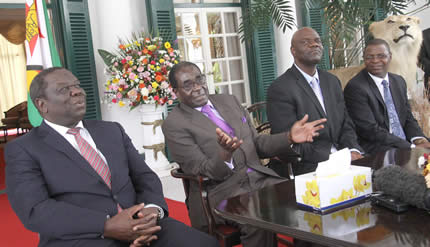 He said Mugabe did not want the views of the people to prevail as they were detrimental to the party. The journalists had gathered for a press conference on the hero status of late Vice President John Nkomo.

Discussing Copac issues with predominantly state-owned media reporters in the 14th floor board room of the party’s HQ, Mangwana said: “As Zanu (PF) we got our way regarding the constitution making. ‘Mudhara’ (Mugabe) warned us against compromising on the most important aspects of the constitution.

“Regarding the running mates issue we had to be cleverer than MDC. Mugabe made it very clear that this issue would further divide and destroy Zanu (PF). The fact that he would be forced to nominate running mates would also isolate him from the people, as he was likely to choose running mates out of favour with remaining party supporters.”

‘Civil servants not allowed to contest for political office’

Mangwana said in order to outwit MDC Zanu (PF) had to tactfully acknowledge that the running mate clause was a brilliant idea – but not for now.

On the fate of incumbent Zanu (PF) vice presidents, Mangwana said their offices would be disempowered as the authority they hold would be transferred to the national chairperson’s office.

He said the arrangement that the Attorney General would now sit in cabinet while the Prosecutor General would be responsible for all prosecutions, was a good set up for Zanu (PF).

“Also remember the Supreme Court would be the constitutional court for the next 10 years if the draft constitution gets the people’s approval at the referendum. Your guess on what will happen there is as good as mine,” said Mangwana with a smile.

Asked by this reporter if the constitution breakthrough suited Zanu (PF), Mangwana said:

Mangwana said Zanu (PF) panicked last week when MDC negotiators told Mugabe’s party to go to hell if it did not want to compromise on outstanding issues.

“We caught a cold when negotiators from MDC formations showed us the exit door if we were not prepared to give in to their demands. We lost sleep and had to engage their secretary generals for a breakthrough.

“Consensus was only reached an hour before we briefed leaders of the three parties on progress. The breakthrough was also made hastily out of fear that our (negotiators’) credibility would be questioned by the GNU principals,” he said.

The breakthrough has activated political activity around the country, with political parties increasing regularity of party meetings. Zimbabwe is back into the tense election mood.

As MDC-T is conducting countrywide debriefing meetings about the status of the constitution and the way forward, the Zanu (PF) commissariat is frantically revisiting the party membership register to take audit of party structures from cell to provincial level. The Zimbabwean

‘Civil servants not allowed to contest for political office’