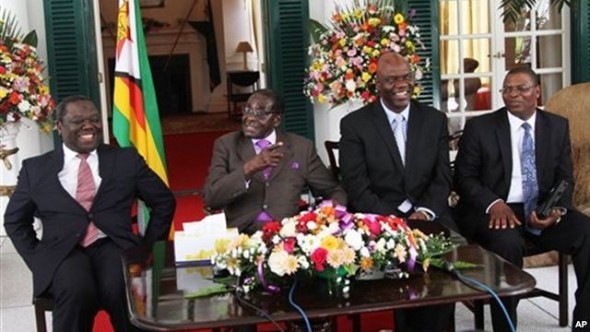 Principals to the GPA agreed on Thursday to retain the contentious issue of the running mates in the new constitution, but the relevant chapter will be suspended for 5 years and will have no effect in this year’s elections.

The chapter on running mates was the only issue described as ‘unresolved’ in the report that was presented to the principals by a seven member cabinet committee.

A source privy to the discussions held by the principals at State House in Harare told SW Radio Africa on Friday that the chapter will be invoked in 2018, when a presidential candidate from any of the contesting parties will have a running mate.

The running mate issue was included in the 18th July draft, reportedly at the instigation of ZANU PF negotiator Nicholas Goche. According to clause 5.5 (2) of the draft charter, a presidential candidate must nominate two candidates to stand as his running mates.

But the chapter caused problems in both ZANU PF and the MDC-T, with the former ruling party discussing it at a politburo meeting and then demanding that it be scrapped. There were concerns within the party that it would force Robert Mugabe to reveal his desired successor ahead of elections.

In the MDC-T the issue caused serious ructions and jockeying for positions, as it left the party deeply divided into three groups over the criterion for choosing the running-mates.

One group lobbied for the handpicking of running-mates by party leader and Presidential candidate Prime Minister Morgan Tsvangirai, another preferred election by the provinces, while the third backed appointment by seniority.

‘The way the principals resolved the issue means that they will revert to the old system in the coming elections where the president will appoint the Vice-Presidents after the poll. The chapter will be brought into force before 2018,’ the source added.

UK based political analyst Sanderson Makombe told us not much has changed from the draft that was released in July by the parties.

‘Going by what has been said, I don’t think there have been any significant changes to the draft, although we know there were concessions made by all parties. I honestly believe right now that the YES vote will prevail in the referendum as all parties are agreeable to the draft document,’ Makombe said.

Meanwhile, the three constitutional drafters were busy Friday adding into the new charter issues that have been resolved and agreed to by the principals.

The drafters, former High Court Justice Moses Chinhengo; lawyer Priscilla Madzonga and University of Zimbabwe law lecturer Brian Crozier are expected to be done by next week, after which COPAC will present the draft to Parliament in the second week of February. SW Radio Africa