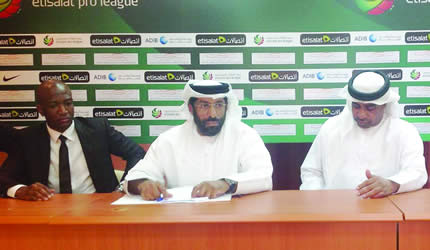 SPEEDY forward Edward Sadomba headlined the list of Zimbabwean internationals on the move so far this January transfer window when he signed for United Arab Emirates Pro League side AL Ittihad Kalba on a short but lucrative deal at the weekend.

Sadomba was unveiled as an Al Ittihad Kalba player and given the club’s Number 10 jersey when he completed a six-month switch from Sudan to Dubai.

The former Dynamos kingpin opted for the United Arab Emirates Pro League ahead of another big move to African club champions Al Ahly of Egypt, who had been close to prizing him away from Sudanese giants Al Hilal.

Al Hilal’s bitter Sudanese rivals El Merrikh had also kept a close eye on Sadomba and sought to snap him up once they got wind of the fact that he had not renewed his contract with the Blue Sharks.

Merrikh are understood to have resolved to try again to secure Sadomba’s signature in June.

But after Al Ittihad dangled a deal worth more US$400 000 for a six-month contract, Sadomba did not hesitate to put pen to paper and ink the agreement.

The 29-year-old Warriors forward was literally over the moon after signing the deal and revealed that he was now looking ahead to a fresh challenge in the United Arab Emirates.

“I would want to thank God for this opportunity that has come my way.

“It is true that there had been a strong offer from Al Ahly and they were really pressing for a deal that would have taken me to Egypt.

“There had also been offers from Qatar, Saudi Arabia and other clubs that were interested in my services but an offer that was also too good to resist then came my way in the United Arab Emirates and that is where I will be playing for the next six months then we see what goes on from there,’’ Sadomba said.

In signing a lucrative deal with Al Ittihad Kalba Sadomba, who also considered the financial aspects of his deal as well as the challenge of playing in a new environment, led the way for a cast of Zimbabwean players who have been making moves this month.

England based midfielder Bradley Pritchard, who plays for Championship side Charlton Athletic, has also attracted the interest of Premiership clubs Fulham, Reading and Aston Villa.

Castle Lager Premiership Soccer Star of the Year and Dynamos ace Denver Mukamba is also on the verge of completing a move to South African top-flight side Bidvest wits.

The 20-year old Mukamba, who led DeMbare to a second successive league and cup double last season, has undergone medical tests after impressing the Johannesburg side but his agent Gibson Mahachi yesterday said the Wits doctor had conducted further tests and might release the results today.

While Mukamba will be awaiting his results, his DeMbare colleague and striker Roderick Mutuma will be heading to the Free State to begin a trial stint at Bloemfontein Celtic.

Mutuma is one of three local players who are expected to travel in the company of their manager Edzai Kasinauyo to South Africa this morning.

The others are Soccer Star of the Year second runner-up and Monomotapa talisman Ronald Chitiyo, who has now attracted the interest of South African champions Orlando Pirates and will make the Buccaneers his first port of call ahead of Ajax Cape Town.

Mutuma, who had started pre-season training with Dynamos last week, will be at Celtic for two weeks.

The lanky forward will now be going with the blessings from the Glamour Boys, who have since approved this trip.

DeMbare had earlier indicated that they would not release the player without official communication from Celtic and yesterday they acknowledged receiving a bid from the Supa Diski outfit through Kasinauyo on Friday.

Mutuma had been linked to a number of teams that include Orlando Pirates and South African First Division side Dynamos but Kasinauyo said only Celtic had shown serious interest at the moment.

“He is leaving tomorrow morning, probably aboard the first flight. Celtic have indicated that they want him for trials and he will be going just for that.

“It’s not like he will be on a club hunting mission whereby a player hops from one team to another trying to impress.

“If it doesn’t work out at Celtic then he will come back and try again another time,” said Kasinauyo.

Mutuma could be joined on the expected morning flight by Gunners defender Byron Madzokere and Monomotapa midfield wizard Chitiyo, who has also been linked to a number of South African clubs that include Chippa United, Celtic and SuperSport.

But Chitiyo’s first port of call will now be Orlando Pirates and with a possibility of proceeding to Ajax Cape Town afterwards. He will be joined at Pirates by Madzokere, who is set for another trip across the Limpopo, following an unsuccessful bid at Chippa United last season.

Another Dynamos striker Simba Sithole is scheduled to make the trip to South Africa anytime this week as he is reportedly wanted by SuperSport United.

DeMbare vice-chairman Chikengezha confirmed that arrangements were being made for the former Mamelodi Sundowns player, who returned home during the middle of last season to return to South Africa.

Sithole endured a frustrating one-year stay at Sundowns where he left without kicking a ball in a competitive game.

Now the former CAPS United and Shooting Stars man is scheduled to spend one week in South Africa, trying to find the in-roads back to the Supa Diski.

Both Sithole and Mutuma are, however, still expected to play important roles in DeMbare’s Champions League campaign this year.

If they leave, their departures could scupper coach Callisto’s Pasuwa’s plans to make an impact in the Champions League this year, as they are part of the 25-man squad registered with the Confederation of African Football for the tournament.

Dynamos had, however, earlier indicated they will not sell those players who they have registered for the Champions League. DeMbare began their preparations last week. Chikengezha said they had received official requests for the players and Dynamos will not stand in their way.

“We would obviously want them to be with the team during this period of preparations but you cannot stand in the way of the player if an opportunity arises.

“We have received communication for the players’ trials and we have given them the greenlight. It doesn’t work to hold back the player because that person will not be able to concentrate fully since his heart and soul will be somewhere else.

“So they will be going according to the arrangements. What is important to realise is that going for trials and leaving the team are two different things altogether,” said Chikengezha.

DeMbare are also still hoping that their deal with Hwange’s Francesco Zekumbawire will finally come to fruition. Zekumbawire has a running contract with Hwange and the clubs have since agreed in principle for the release of the player.

Chikengezha said they are now expecting Zekumbawire to join them in camp this week while plans are being made for the payment of the agreed fee.

The Glamour Boys are also expecting defender Aaron Katebe to join them in the wake of a stormy week in which they appeared to be losing the Zambian centre-back to rivals FC Platinum. Chikengezha said they received a call from the player, who gave them assurances that he was coming to Dynamos.

DeMbare are expected to leave for a pre-season training camp, most probably in Kariba, sometime this week. But that trip is not yet clear, as the club has been struggling to raise the financial resources.