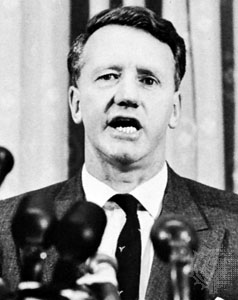 The farm, which encloses Gweru City Council’s main supply dam Gwenhoro Dam, was recently gazetted for compulsory acquisition by the government. Although MSU spokesperson Sinikiwe Tirivanhu had not responded to questions sent on her e-mail, farm manager Owen Jarman confirmed the grab.

He said he was now winding up farming operations and paying off terminal benefits to his 35 employees, some of whom have been at the farm for over 40 years.

“I can confirm that the MSU will be taking over the farm, but all I can say at the moment is that we are engaged with the university in some negotiations as far as the exit date and other logistics are concerned,” Jarman said.

Gwenhoro operations include cattle ranching with a herd of over 500 cattle, a citrus plantation and poultry project with 3 000 layers. After Smith’s death in November 2007, Jarman continued managing the farm, but reporting to the late Rhodesian leader’s children based in Cape Town, South Africa.

It was not immediately clear if the university was going to take over the livestock and farm machinery without paying compensation. Part of the 6 000-acre ranch was invaded by Zanu PF supporters at the height of the land invasions in 2000.

The invasions coincided with the visit to Zimbabwe by the then Commonwealth secretary-general Don McKinnon. But Smith, who led white-ruled Rhodesia throughout the 1960s and 1970s, played down the incident saying he had good working relations with the surrounding community.

“No, they all love me. I’ve got more black friends than (Robert) Mugabe at present,” he said then. NewsDay

Rabble-rouser thesis title as Sikhala graduates with Master of Laws