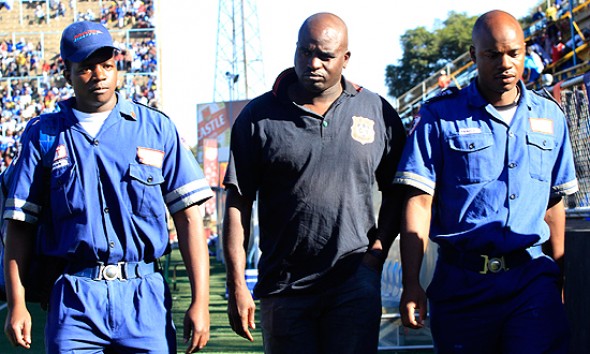 CHAMPIONS Dynamos remained on course for the defence of their title yesterday after winning an important boardroom battle when the Commercial Arbitration Centre quashed Hwange’s bid to have the result of their controversial match against the Glamour Boys nullified.

Hwange had been pinning their hopes on the Commercial Arbitration Centre after the Zifa Appeals Committee threw out their case and allowed the result of the game which Dynamos won 4-2 at Rufaro on May 6 to stand.

Yesterday, the Commercial Arbitration Centre duo of Muchadeyi Masunda and retired High Court judge Justice George Smith dismissed Hwange’s appeal for lack of evidence that the alleged assault on coach Nation Dube had a bearing on the result.

The verdict, delivered in a six-page judgment, means Dynamos will now go into battle against relegated Hardbody at Ascot tomorrow needing just a point to successfully defend their Castle Lager Premiership title and claim a record 19th championship.

The ruling also means Hwange would now have to avoid defeat in their final Premiership game against another relegated side Quelaton at Luveve tomorrow to be certain about their survival from relegation.

In their judgment, the Commercial Arbitration Centre judges noted that they had not found any evidence to suggest that the Hwange players had been traumatised by the attacks on their coaches just before the match.

Masunda and Smith said the matter that was before them was to determine whether to confirm the Zifa Appeals committee ruling or go by the PSL disciplinary committee’s judgment to nullify the match.

“At the hearing before the PSLDC, HFC (Hwange) asked that the match be replayed as they felt that its players had been severely traumatised and psychologically affected as a result of the alleged assault on their coaches.

“It was argued that the players failed to put maximum effort towards the match as a result of the attack on their coaches.

“In addition, the three DFC marshals are banned from attending all soccer matches under the jurisdiction of Zifa, PSL and any of its (sic) affiliates until the end of the season

“It also directed that the result of the match was nullified and DFC and HFC were to replay the match’’.

Masunda and Smith then noted Dynamos’ grounds of appeal which were that:

“PSLDC had failed to establish the extent of the injuries of the HFC coaches and whether the injuries were so serious as to be regarded as having traumatised the players, regard being had to the manner with which HFC players played the entirety of the match, including scoring two goals against DFC

“In actual fact, the HFC coaches had actually provoked the situation when they blocked DFC players from entering the field of play and even manhandled Washington Arubi, the DFC captain of the day, thereby prompting marshals into reaction.

“The PSLDC ought to have found out that the HFC coaches had sustained injuries which were so grave as to render them incapable of making it onto the bench.

“With regard to the penalty, it was too excessive.

“The match had been played competitively and HFC actually scored twice, a clear indication that the players were not traumatised by the alleged assault on their coaches

“The PSLDC had seriously erred and failed to establish if the HFC players were indeed traumatised as a result of the incident and, if so, whether their play was affected by the incident’’ the judges noted.

It also emerged from Masunda and Smith’s findings that none of the Hwange players and officials had been called to testify before the PSL disciplinary committee despite claims that the players had been traumatised by the events in the dressing room tunnel.

“This is made worse by the fact that no player was ever called from HFC by the PSLDC to testify before it.

“The issue of the players being traumatised is one which ought to have been corroborated by evidence from the players themselves and not simply the evidence of coaches taken in isolation’’.

Although Hwange had successfully managed to convince the Commercial Arbitration Centre that an assault on their coaches had indeed taken place, that alone seemed not good enough to sway Masunda and Smith into ruling in their favour.

“In its defence of the decision, HFC made the following relevant submissions: DFC, although seemingly challenging the outcome of the disciplinary hearing proceedings, was conceding that an offence was committed by its marshals.

“It is common cause in that the marshals paid Admission of Guilt fines and the verdict of guilty was appropriate.

“As regards the penalty, it was appropriate, in the light of the offence committed and the precedents on similar matters.

“The outcome of the game was obviously influenced by the incident and a rematch at a neutral venue would be fair,’’ read part of the judgment.

However, the Commercial Arbitration Centre also took into account the findings of the Zifa appeals committee which noted that there had not been conclusive evidence on what had really transpired during the attack on the Hwange coaches by the Dynamos marshals.

“However, the record bears testimony that there was an assault that took place.

“They were not sure how the assailants were apprehended because the record does not state exactly what transpired and the witness on whose testimony the PSLDC relied was also not present when the incident happened.

“From the uncontroverted evidence led, he was only called after the incident. Furthermore, there is no report form either the police or referee on the actual incident.

“The case can be decided on one particular aspect. What is basically in issue is whether the HFC players were so traumatised as to fail to play their normal game or to render them unable to concentrate on the match.

“This is a very difficult question to consider.

“The evidence on record does not materially assist ZAC to come to a conclusive decision as a number of factors would require to be considered, mainly, the state of mind of the players when they trooped onto the field of play.

“It is a psychological and mental decision which requires psychological expertise. To an extent, the referee’s report might have helped as being persuasive but not determinant.

“The esteemed members of the ZAC are not privy to any psychological treatment or examination which may have been carried out on the players.

“The only evidence they have on record is that, in actual fact, HFC played very well and, with a bit of luck, could have won the match.

“It was submitted by DFC, and not controverted by HFC, that the team played very well and was attacking the DFC goal area relentlessly, particularly during the dying stages of the match.

“They are also unable to ascertain the extent of the seriousness or otherwise of injuries allegedly sustained by the two coaches as they were not favoured with the medical affidavits or certificates relating to the same,’’ the judges said. The Herald