Mrs Tsvangirai reading blunder is not an embarrassment

OpinionPoliticsSpeeches
By Nehanda Radio On Nov 4, 2012 591 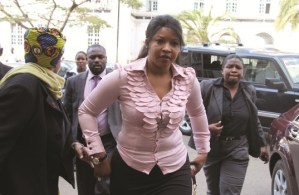 About a week and half ago Elizabeth Macheka, who is wife to Zimbabwean Prime Minister, Morgan Tsvangirai, attended the launch of the Thokozani Kuphe Cancer Foundation where she was one of the speakers.

Thokozani Khupe is the Vice President of the Prime Minister’s party, the MDC-T, and also the Deputy Prime Minister of the country. She is also a cancer survivor and therefore saw it fitting to start an organisation to help victims of cancer.

But I digress; this post is not about cancer, or the honourable and brave deeds of the Deputy PM. This post is about Ms Elizabeth Macheka and the speech she read at the launch of the Cancer Foundation.

Ms Macheka was doing quite well until she failed to properly pronounce ‘reiterate’. The media quickly took up the story and sensationalised it, bringing to national attention a story otherwise unworthy of even a small column in the smallest newspaper.

Several days later the national broadcaster ZBC added more wood to a dying fire when, in an apparent display of failing to find anything newsworthy, they discussed Ms Macheka’s speech reading skills.

They called the error ‘an embarrassment’ and it was suggested by some that the PM’s wife should attend night school. On the web Ms Macheka was ridiculed and insulted, she was called illiterate and uneducated while others blamed the Prime Minister’s office for failing to groom her in private.

I do not think that Ms Macheka cannot read and pronounce simple English words. The blunder was probably caused by stage fright and poor public speaking skills which are totally unrelated to being able to read.

I have met some very intelligent people who struggled with presentations and stuttered when asked to give simple thanksgiving speeches in class. Similarly, I know some people who are not very educated but have no problems addressing multitudes in churches, at rallies and other public gatherings.

Therefore, in my opinion, to say that the Prime Minister’s wife is illiterate because she struggled with one word is rather inane. But assuming that she could not read and pronounce ‘reiterate’, this fiasco raises some important questions.

Firstly, does ‘being educated’ mean being able to pronounce English words? Is speaking flawless English a sign of academic excellence? Does it mean then, that Brits, Americans, Australians and other people who have English as their first language are all educated? Or does it only apply to those who are not native speakers of English?

Perhaps intelligence is measured by how well one masters foreign languages, as I’ve never heard anyone making the headlines for failing to properly read speeches in local languages. If so, maybe the guys at ZBC can tell us how well they speak Chinese since we now follow the “Look East Policy”.

Africans are still imprisoned by European value systems and denigrate their own cultures, relegating their own languages to dustbins and glorifying the languages of their erstwhile masters. It is a source of pride for many in Africa to write and speak flawless English and French even when they can hardly construct a proper sentence in their mother tongue.

The colonial yoke hangs over us all, and we need to decolonise the African mind, to reconnect the African with his past, his culture and, above all, to inculcate a sense of pride in ourselves. We need to be proud of our languages, our values, our identities and triumphs.

More importantly, can we make accurate judgements of people using their ability to read and write, or their level of education? Is a university degree reflective of someone’s wisdom and social worth?

There are many very educated people who have not done anything for their societies, and many who are not ‘educated’ yet are revered far and wide for their wisdom and positive contribution to humanity.

The PM’s wife has done a lot charity and humanitarian work in the past month alone, visiting and donating to some schools for the disabled and visiting jailed MDC members. Can all this be erased and forgotten because she cannot pronounce one word?

Actions, after all, speak louder than words. What has been done by those who can read and pronounce thousands of words in different languages?

I think it is time to reflect on whether education, despite its obvious importance, is the most important thing that a society should have. Especially an inherited colonial education system which has countless of times proved to be unsuited to the African context.

Perhaps then we will see why the country with the most ‘educated’ people in Africa is in such a terrible mess.

Tawanda Moyo is a student of engineering, philosophy and politics. You can read his blog: Reflections Of An African Youth