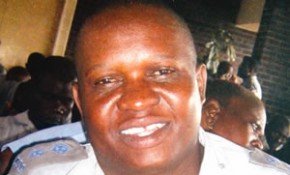 The case in which 29 members of Prime Minister Morgan Tsvangirai’s party are being accused of killing a policeman, took a dramatic twist when the brother of the murdered cop accused Zanu PF and state security agents of killing him.

MDC-T Youth Assembly Chairman Solomon Madzore and 28 fellow activists are facing what his party believe are ‘trumped up’ charges of killing Inspector Petros Mutedza. The group has had countless applications for bail turned down and some of them have been in custody since their arrest 16 months ago in May.

Last week however, Tichaona Mutedza, a brother to the deceased, blew big holes into the prosecution case when he said that his brother’s body had no genitals and tongue and that he believed the 29 suspects who have been in custody since last year in May are innocent.

During cross-examination in a bail application Mutedza insisted that his brother was killed by members of the Central Intelligence Organisation (CIO) who are loyal to Zanu-PF. Insisting that Inspector Mutedza’s genitals and tongue were missing he challenged the State to exhume the corpse to verify his claims.

Mutedza proceeded to implicate a Zanu PF District Coordinating Committee (DCC) chairperson in Mt Darwin called Mr Chirwanemoto who hinted at the killing of his brother during a political gathering on the 6th of August. Mutedza said on the 18th of April last year his late brother confirmed the plot against him.

Mutedza proceeded to implicate CIO operatives identified as Scott and Victor Jaravaza as the ones who were initially set to kill his brother and in return get a tractor and a vehicle respectively. Mutedza said Zanu PF wanted to use his brother’s death as a campaign tool against MDC-T.

“They (Zanu-PF) used the death of my brother to gain political support. They are de-campaigning MDC by portraying them as a violent party. They are also detaining the 29 MDC activists for no reason,” said Mutedza.

Stung by the claims, the prosecution quickly rushed to accuse Tichaona Mutedza of grandstanding to gain political mileage.  Law officer Edmore Nyazamba described Mutedza, as a self-confessed MDC-T activist and attention seeker who was not concerned by the death of his brother.

Nyazamba accused Mutedza of misleading the court claiming “You were not present at Glen View 3 shops when your brother was killed. You did not go to Glen View to inquire on his death neither did you interview anyone to get the truth. So who are you to come to this court and tell us who killed your brother.

“The police investigated, went to Glen View and compiled information before charging the 29. It is clear that you want to gain political mileage because you are a member of the MDC. You are not even worried about the death of your brother,” he said.

Nyazamba produced a document allegedly proving that when a pathologist conducted a post-mortem, all the private parts were in place but Mutedza said the pathologist simply appended his signature to please certain authorities.

Justice Chinembiri Bhunu deferred the bail hearing to Tuesday when Inspector  Mutedza’s father is expected to give evidence. The case has drawn comparisons to the one in Shamva, this year in March, where seven policemen accused of murdering a mine worker were granted $50 bail after one month in detention.