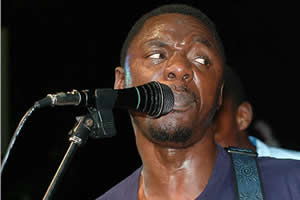 After performing his popular, Zora butter song, the Sungura icon was called by President Robert Mugabe to come in front of him.

Macheso, who was humbled to be called by the head of state, went down on his knees before bowing his head touching the ground and shook hands with Mugabe. Tears could be seen flowing on the cheeks of the star musician soon after.

Recently Minister of Tourism and Hospitality Walter Mzembi cried after being presented with a life size portrait of the 88 year old leader who has ruled Zimbabwe since independence in 1980. Radio VOP