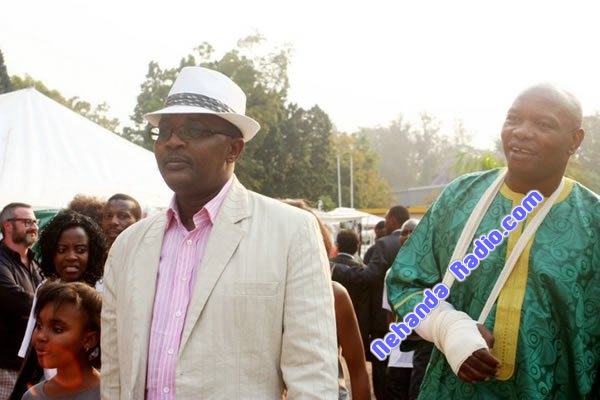 HARARE – Tourism minister Walter Mzembi has sought President Robert Mugabe and his deputy Joice Mujuru’s help in a vicious fight against top Zanu PF chefs who have invaded wildlife conservancies with the backing of some top army officials.

Highly placed sources told the Daily News Mzembi has been involved in a nasty fight with Shuvai Mahofa, a former Zanu PF MP and deputy minister over the invasion of a wildlife conservancy and poaching.

Mzembi fears anarchy prevailing in the conservancies will dent the country’s image ahead of the United Nations World Tourism Organisation (UNWTO) general assembly conference which Zimbabwe is co-hosting with Zambia next year.

The event is viewed as key to jumpstarting Zimbabwe’s tourism sector which has suffered the brunt of bad publicity generated by a decade of political turmoil.

Wildlife conservation activists claimed in interviews with the Daily News that Mahofa had strong backing from serving and retired military commanders, some of whom have interests in the conservancies where poaching is rife.

Parks and Wildlife director general Vitalis Chadenga confirmed that poaching is rampant in the conservancies under dispute. Mzembi says he wants Mahofa, feared war veteran Francis Zimuto aka Black Jesus and a white farmer identified as Ken Drummond stopped from decimating animals in the lucrative ranch.

A letter sent to Mugabe and Mujuru and seen by the Daily News states that Mahofa is acting illegally.

“The High Court of Zimbabwe has ruled to suspend Mahofa’s lease agreement and that Forever African Safaris are the rightful occupiers of the ranch in the Save Valley Conservancy,” reads the communication.

“The World Tourism Summit is scheduled for 2013 in Victoria Falls Zimbabwe, yet National Parks director Vitalis Chadenga and Natural Resources minister Francis Nhema continue to ignore the fact that Savuli has been invaded on the strength of ‘documents from their offices’.”

Mzembi, who enjoys the support of local chiefs and ordinary people in the Lowveld, refused to comment on the dispute. He however took a swipe at officials who were using their political links to amass wealth at the expense of ordinary people.

“The nation has been witnessing the blatant abuse of well-meaning policies by greedy individuals who have benefited ‘70 times seven times’ from virtually every empowerment policy that has been pronounced,” he said.

“An indigenisation move that benefits the same persons over and over again immediately lends itself to scrutiny and interrogation. Instead we are witnessing some of the unintended consequences of well-meaning programmes that end up providing raison d’etre and justification for an attitude of entitlement and impunity fronted as empowerment by the greedy fringe of our society. This must be checked,” Mzembi said.

“However I am reluctant to comment on the matter before I talk to minister Nhema under whose ambit conservancies’ fall suffice to say I am disturbed by the negative impact of these developments on tourism,” said Mzembi. Chadenga said poaching was widespread.

“People are hunting without permits but we have instructed our Masvingo office to act,” he said. He however defended Mahofa, saying whites in the area were the ones causing problems.

“As far as we are concerned Mahofa has a valid lease and the problem that is in the conservancy is to do with co-existence. Mahofa got a 25-year lease under the Wildlife Best Land Reform Policy that seeks to open conservation to black Zimbabweans.

“It is true I have received protests from in particular the German ambassador but my response was that what we have is a co-existence issue and nothing more,” Chadenga said. Chadenga rubbished Mzembi’s claims that the dispute could affect the tourism event.

“The situation is so bad and it is highly likely that several European countries could declare a tourism moratorium on Zimbabwe categorising the country as a danger to wildlife,” he said. He added the firm has two High Court orders against Mahofa that authorities are ignoring.

Nhema was unavailable for comment, but minister of State in Mujuru’s office Sylvester Nguni was angry at how the Daily News got hold of the documents.

“I am disappointed that people seeking our help see it fit to involve the media, waylaying the deputy president of the country into a media trap? “They have already passed judgement that we will not be of much help so you are not going to get a comment from us and I am not sure they will get much help,” an angry Nguni said.

A wildlife conservationist Jonny Rodrigues ,who chairs the Zimbabwe Conservation Task Force, also claimed the army is heavily involved. “There is involvement of serving and retired army generals as well as Zanu PF bigwigs who are using people like Mahofa and others as pawns to get conservancies and land.

Mahofa denied the allegation. “These people are South Africans and I cannot be fighting foreigners. It is my property and I do not want to see anyone. I was supposed to share it with retired Colonel Claudius Makova but he refused and now it is mine alone and I do not even want to see a soldier.

“I surrendered all other farms that I had to my children and they have their own leases. The poaching that is so prevalent in the conservancy is because whites are resisting sharing with blacks,” said Mahofa. Nhema said Mahofa was the rightful owner of the property. Daily News

Outcry over remixing of Gukurahundi song

Police ‘have no right to impound vehicles’