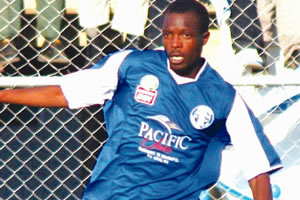 Dynamos gave themselves a lot of work to do in the second leg after failing to win their Caf Confederations Cup last 16 first round tie against Angolan side Interclube at Rufaro Stadium yesterday.

A scoring draw away can however see Dynamos through on an away goals’ rule. Kalisto Pasuwa’s men were on holiday as they have been in recent games while Interclube were more than happy to sit back and soak up the pressure.

Pasuwa said after the match: “I am not happy with the performance of my team. We were very poor in attack. We knew we were playing a team that would congest the midfield. The only option was to use the wings but the boys did completely the opposite. We now have to go to Angola and fight hard.”

Interclube coach Antonio Bernardino said: “A draw is fine for us but everything is still open.

“Dynamos can win or draw 1-1 in Angola so we cannot say we are home and dry after this result. We are going to work hard to prepare well and try to do our best in the second match because we noticed that Dynamos are a very good side.”

Dynamos were given a major scare midway through the first half when Joao Barros headed in but Madagascan referee Nampiandraza Hamada ruled the effort offside.

South Africa-bound Takesure Chinyama had promised a flurry of goals in the build-up to the match, yet his performance, if there was one, was just horrible. Characteristic of his game of late, he was always late on the ball and was very hesitant to commit himself to tackles.

He had the best opportunity to put his side ahead in the 20th minute after being set up by a brilliant Rodreck Mutuma, but he skied his effort from a good range. Chinyama was pulled down by Mateus Francisco as he charged towards goal towards the end of the first half but Guthrie Zhokinyi shot wide.

The University of Pretoria-bound man, Arubi, was also called into action eight minutes later and this time he used his legs to block Neto Nuno’s header from a corner kick.

In between, Zambian Arthur Kaseloki’s shot went wide as Dynamos enjoyed one of the best spells of the match and on 62 minutes Mukamba made his trademark twist and turn on the edge of the box, leaving two defenders at his wake, but skied his effort.

The search for a goal became desperate for Pasuwa who hauled off the ineffective Chinyama for Derrick Kabwe in the 66th minute, but the Zambian quickly disappeared the moment he got onto the field. NewsDay