Biti says Mugabe is ‘seductive, every woman is in love with him’ 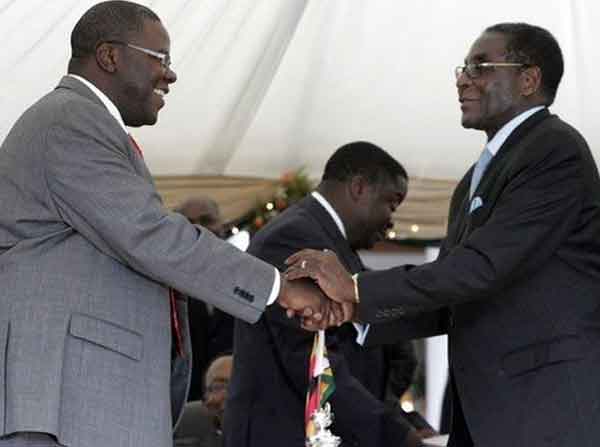 Finance minister and MDC-T secretary-general Tendai Biti says Zimbabweans will realise the importance of President Mugabe when he is gone. Minister Biti, a fierce critic of President Mugabe, told The Sunday Mail that the President was widely misunderstood.

“He is a very seductive man . . . If you have a private discussion with him, you will be shocked by the calmness. I have been saying to my British friends that he is the most British of all British people I have come across . . . He is very calm and seductive: I am sure every woman is in love with him.

“He is a fountain of experience, knowledge and, most importantly, a fountain of stability. There are a lot of horrible things that would have happened in this country if he had not said ‘No’.

Govt borrowed US$200m from China using assets worth US$52…

“History will prove the correctness of this statement. He has been the number one symbol of stability . . . We, the younger generation, are lucky to have gone through his hands.

“We find counsel and wisdom in him. His importance in this country will be seen once he is gone. When he is gone that is when you will see that this man was Zimbabwe. Some of us who came from different parties have had to learn a lot from the man.’’

“He has defended his country. I think he has fought his generational fight, which was the liberation and democratisation of the country. He fought and fought very well. This generation, you and me, must take this country to another level, which is economic liberation.

“So, Robert Mugabe as the nationalist, as the liberator, he has fought a good fight. But what has our generation done? Each generation must fight its own fight. I am very clear about what we have to do in this generation. In my small way, I would like to think that I am fighting the battles of my own generation.

“Unfortunately, I do not think my own generation has a common and united understanding of the generational obligations of our time.” Biti, who doubles as MDC-T secretary-general, said he enjoyed a cordial personal relationship with the President to whom he often turns to for “unlocking” any difficult issue.

“When I do my (national) budget I take it to President Mugabe. There has not been a single discussion where he has said ‘No, no’. He will say, ‘Why don’t you have a relook at this, but he will not use the word ‘no’.

“What I want to appreciate about the man is his capacity to listen, counsel and, most importantly, his unflappability. It is very important for a leader to listen to both sides (of a story) and not (easily) get angry.”

“I will never be like him. I am a bulldozer, a black rhinoceros. That is why I used to support Black Rhinos (Football Club); force, force. He is the opposite. We have learnt a lot from him. I sit with him and talk for hours.” The minister also disclosed that the Government has set aside a chest of $100 million for national elections.

The funds, he said, were part of the $500 million Special Drawing Rights (SDR) allocation which the country received from the International Monetary Fund to mitigate the effects of the global financial crisis in 2009. Government agreed to bank the money as a contingency plan for the impending polls.

“The SDR was a mere US$500 million. The only money that is left is $100 million, which we cannot use because we do not know what will happen if the political leaders say they want an election,” he said, responding to a question regarding the disbursement of the allocation.

“There has to be a contingency plan and Government understands that.” The minister also spoke of his relationship with his party leader, Prime Minister Morgan Tsvangirai. Recent reports have suggested a subtle power struggle between the two while the West was believed to be rooting for the secretary-general to succeed his boss.

“Our relationship is not just normal but very very good. He (the Prime Minister) knows where I am and what I am doing at all times . . . We have only one leader in MDC-T and that is Morgan Richard Tsvangirai. Let me state it on record that I will never challenge Morgan Tsvangirai as leader of MDC.”

On political violence, Minister Biti said the problem affected all political parties and the country as a whole.

“This is a national problem . . . There is a general problem of violence across the country, even in churches. The Anglican Church has been split by violence. We are largely a sick society from that point of view, which is why I referred to national healing and reconciliation.

“We have our own challenges as a party,’’ he added, referring to violent incidents that charactarised the MDC-T’s last primary elections in Bulawayo. Sunday Mail