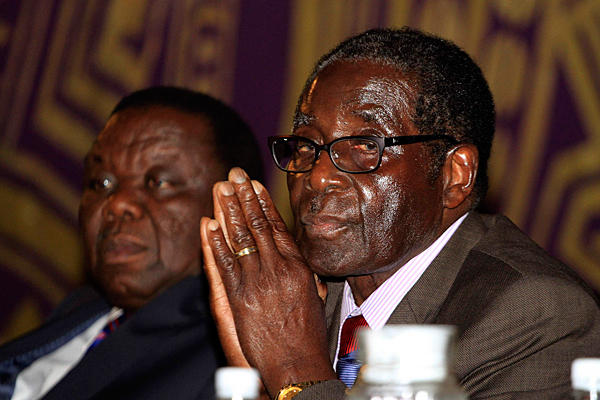 HARARE – President Robert Mugabe, 88 says he is still fit and strong enough to contest in the next election which he is clamouring for this year. Mugabe aired these sentiments yesterday during the Zanu PF Women’s assembly meeting held at the Zimbabwe Institute of Public Management (Zipam).

The president’s pronouncement of good health comes at a time when speculation about his health and advanced age has reached fever pitch. There have been calls for Mugabe, who has been in power since the country gained independence in 1980 to quit active politics because of his advanced age.

Even members of his inner cabal are keen to see him leave office. Last year whistle blower website WikiLeaks published leaked US diplomatic cables of meetings held with members of his party and US officials which suggested that he would be dead by 2013.

“Zvirikunzi va Mugabe wachafa mugore ra 2013 ko chandino fira ini chii ini? Ini ndakangoti gwindiri zvangu (They are saying Mugabe is going to die in 2013 but why should I die. I am as fit as a fiddle), I am still very far from it,” Mugabe said. Others like politburo member Jonathan Moyo even suggested the 88-year-old was suffering from throat cancer.

Sources close to Mugabe say he is suffering from prostate cancer, a condition common men of his age. Speaking on his health for the first time, Mugabe poured his heart out to delegates who included politburo members president of senate Edna Madzongwe and defence minister Emmerson Mnangagwa.

“There are less than six months to 2013. Tinongosvika tese tichitamba gore idzva (We will get into the New Year and celebrate together),” Mugabe said.

He added that: “Tsvangirai says that I am very frail but isu tinoziva hedu zvirwere zvirimuvanhu. Kune ma ARVs ndiwo arikusimbaradza vanhu. (We know the ailments people are living with there are anti-retroviral drugs which are making people healthy).”

Mugabe also took the opportunity to speak out on factionalism which manifested in violence during the party’s district coordinating committee elections which were held in the country’s provinces recently.

He urged the women’s assembly led by Oppah Muchinguri not to be sucked into the ugly web of factionalism which is threatening to split the party which has until now managed to remain united.

Mugabe told thousands of his supporters not to be swayed by faction leaders because the current leadership had received their mandate from congress. “Gumbo uko, gumbo mu MDC kana kunzi kune imwe faction kwete. Utungamiri hauna chaungarevi kana husina rutsigiro (One leg in the party and one leg out in the MDC or in a faction will not be tolerated.

Leadership without support is meaningless),” Mugabe said. He added that; “Kune ma hure emusangano anoti zvikadai ndinenge ndiriko (There are party prostitutes who say if it does not work out here I will be with the winning side).” Daily News

Zanu PF wants the army to campaign for it