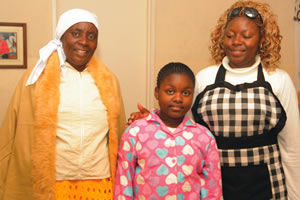 One wintry morning while pupils trickled to Cranborne Boys High, south of Harare, one notorious boy dressed differently — his grey uniform inside out, backside in front, pockets dangling — in a way that would have made the 1990s rap duo Kriss Kross — who loved to dress back to front — green with envy.

“I wanted to see how people reacted!” Talk of Rockford Josphats in music or social circles is usually accompanied by controversy.

His widowed mother, a devout apostolic sect member is Roki’s exact opposite — conservative, soft, calm, composed, very assuring and motherly — so much that you might never believe she sired a mischief brewer.

Florence Josphat nee Masona, is a simple 51-year-old villager living in Chitsvatsva Kraal, Seke communal lands on the outskirts of Chitungwiza, where she resides after retiring from the Zimbabwe National Army’s transport department.

The mother of three, sired Roki (27), the second born and only son, Belinda (29) the first born and Olga (20) with her late husband Herbert Dustin Josphats, a tough as teak soldier. They both expected a lot from Roki as the only boy.

“Since I have known Roki as a toddler he was never violent, rude or temperamental but merely mischievous. Now he is something else. I am really surprised now that I raised an artiste because as parents we wanted the best out of him.

“His father was really tough on Roki such that he wanted him to be the outstanding student in class something which he used to do when he was in primary school,” she said.

Contrary to gossip that Roki dropped out of school, his mother said Roki was a bright student who attended Southerton Primary School and did his O Levels at Cranborne Boys High. However, things turned worse for Roki after his father refused to let him go to boarding school.

“I used to work at 2 Brigade in Cranborne and from time to time I was called to the school by the headmaster following Roki’s misdemeanours.

“One day, he wore his school uniform inside out and back to front. When I asked him he said he wanted to see how people would react to that. When that happened I wouldn’t tell his father because I knew what would happen to him.

“Of course, I loved my husband but he was a different person after drinking one too many. He was abusive at times while being harsh on Roki to the point that he was called names. His friends called him ‘Master’ while the children at home called him ‘Shaft’ from the movie Shaft.

“My relationship wasn’t that smooth. It had its ups and downs but at times we had a good time as a family,” she said.

After O Level Roki, who passed four subjects, could not stand his father and opted out of the family home in Waterfalls.

“One day his father woke me and said Roki had asked for his own space. So he moved out of the family home to live with his friends.

“While living with his friends Roki would once in a blue moon, call me here and there or he would just go quiet. But one thing about my children is that they are united, so, I would hear about Roki from his sisters,” she recalled.

One day she got shocked to see Roki in one of Dicey’s videos. Dicey is one of the first urban groovers, who popularised the genre, early in 2000.

“We were watching television with her sisters when we saw Roki in the video and that’s how I got to know what he had been doing all along.

“And looking back I was then reminded that he probably could have taken after his uncle, the late, Kenny Chitsvatsva of the Bhundu Boys.

“Kenny used to take Roki for rehearsals in Highfield. There, Roki would play drums just like his uncle so I thought this was where it all began,” she said.

Coming to Roki’s personality, his mother said although he was a peace-loving boy, and respectful, he was indecisive when it came to dating women.

“When there is violence Roki can easily walk away because he’s scared of fighting and he enjoys his peace. He is the sort of person who doesn’t want to be pushed to the limits. But when it comes to love affairs my son is very indecisive.

“One moment he says he loves this woman and the next he tells you stories about that woman. And, before you even go over it, he brings another woman,” she said. Although she has on several occasions expressed her reservations, she has failed to rein in his wayward behaviour.

“He always has his way. This is why I blame the girls who throw themselves at him because they see that he is not ready to settle down but they still love him.

“First, it was Pauline with whom he fathered two children before dumping her for another girl called Amanda. Although I can’t really say what I think about this whole affair one thing for sure, Pauline didn’t know her limits as a woman and Roki had not matured enough to settle down.

The inconsistency and haggling in the relationship, has resulted in Roki chasing after other women.

“He also introduced us to Juliana and before we knew her better, he brought Melody, then a dancer in his group. He claimed that Melody stood by him when things were bad for him. So all in all, Roki has fathered five children with four women.

“I am a member of the Johanne Masowe yeChishanu Yenyenyedzi Nomwe (The Seven Stars) and at times I invite Roki to church and depending on his mood and at times, schedule he comes. But if I ask him to buy me anything related to my religion he does so without hesitation.

“Even though I occasionally take him for the prayers at the shrine, he is clear he does not want to be a member. I have gone with him to the same gathering since he was young.”

Asked about Roki’s performance in Big Brother StarGame, she said she prays that nothing bad comes Roki’s way. She is also hopeful that he wins the money.

“If he wins my prayers would have been answered. If he loses I don’t know how he is going to take it because the last time he was stuck in Malaysia he suffered from depression and would compensate for it on beer and smoke.

“It took us long to convince him that such was life and I also hope that he doesn’t lose his mind while in the house,” she said.

Though not a regular viewer of Big Brother StarGame, she confirmed she was in full support of her son and wished him well.

“I am his mother and I want him to win. What you see in the house is the real Roki and he can never be anything else,” she said.