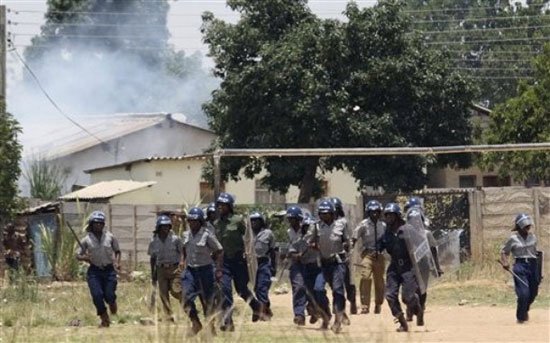 The murder of Sekuru Cephas Magura, the MDC-T chairman for Ward One Mudzi North, has again cast a spotlight on the issue of police loyalty to ZANU PF, and many Zimbabweans are demanding that the perpetrators be punished to the full extent of the law.

The Mudzi disrict of Mashonaland East is said to be tense and people have been staying at home whenever possible since Saturday, when a ZANU PF mob of about 300 attacked 70 MDC-T activists at a rally at Chimukoko Business centre. The thugs had also put up roadblocks in the area.

According to accounts by those who were at the rally, ZANU PF activists led by Ward 3 councillor David Chimukoko started toyi-toying and chanting slogans near the venue of the MDC-T rally. Chimukoko even threatened Seargents Ngwenya and Mashipe after they told him the rally was cleared.

Zaka villagers live in fear of the past

Political analyst Professor John Makumbe said the reason that the Public Order and Security Act (POSA) requires notification of the police when holding public events is so that they can be present to ensure there is no harassment or disturbances. But they always fail to protect the MDC.

“What is worse is that in Mudzi the police were looking on rather than intervene while people were being beaten. In a very subtle way the police are the ones perpetuating political violence,” Makumbe explained. He added that Mugabe will not order the arrests of his own party members because he would lose support.

Witnesses have said Sekuru Magura went missing after the attack and his body was found over an hour later, lying by the roadside where the mob had dragged and left him for dead. The 67-year old official appeared to have been stoned and kicked repeatedly.

The ZANU PF activists have reportedly claimed Sekuru Magura died after falling from a moving truck at the scene. However, they did not explain why they had violently disrupted the rally. Seven other MDC-T activists were also hospitalised after the attack. Four were treated in Harare and released.

Graham Nyahada, MDC-T spokesman for Mashonaland East, told SW Radio Africa that a post mortem examination was being carried out and results would be soon be released. He said there was no doubt, even to the district police, that Magura had died from injuries during the assault.

Nyahada is also the provincial co-chairperson for the Joint Monitoring and Implementation Committee (JOMIC), who are now said to be investigating the incident. He said six ZANU PF activists have been arrested so far and are due for a remand hearing Thursday.

Newten Kachepa, the ZANU PF MP for Mudzi North who allegedly drove the ZANU PF youths to the rally, filed a false report at Kotwa Police Station, claiming he had been attacked by the MDC members.

Unconfirmed reports said Kachepa was arrested at Parliament on Monday, and had already been released from custody.

An angry MDC-T member writing on the Facebook social network said: “police have been ZANU-nised”, suggesting they work only for ZANU PF and do not protect members of any other party.

The grieving party member blasted the police at Kotwa, saying they refused to send re-enforcements, even after MDC-T officials offered their truck as transport. A constable Kachidza allegedly said police do not ride in MDC vehicles. The truck that was offered had no name written anywhere.

The issue of partisan police and security institutions that publicly declare loyalty to Robert Mugabe and ZANU PF has been one of the most problematic issues faced by the political parties working on a roadmap to elections. And the Mudzi incident is reminder of why this has to change. SW Radio Africa

Zaka villagers live in fear of the past