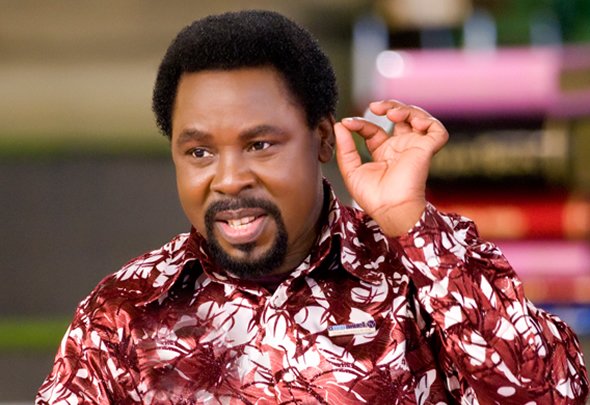 Several church leaders aligned to Zanu PF have attacked popular Nigerian prophet Temitope Balogun Joshua (TB Joshua) claiming he was not welcome in Zimbabwe and his teachings were “judgmental, partisan and unorthodox.”

Zanu PF is in panic mode after Prime Minister Morgan Tsvangirai invited TB Joshua to be the guest speaker at the National Day of Prayer set for May 25, on Africa Day. Evangelical Fellowship of Zimbabwe president and spokesperson Dr Goodwill Shana said God should not be used for partisan purposes.

“Of course we do not have the immigration powers to ban him, but we have never invited him as churches. We think it is important to get people who can help the country to move forward not people who are judgmental.

“People have a right to believe what they want, but it is difficult to believe a Word of God that comes on a partisan basis. We don’t want judgmental teachings, that is why we don’t subscribe to his teachings,” he said.

Dr Shana said Christianity should be a platform for people to repent not to die. TB Joshua is notorious for issuing death “prophecies”, the latest being his announcement that an African president would die, which coincided with the death of Malawi president Professor Bingu wa Mutharika last month.

“Our God is redemptive and when he pronounces death, he confronts that person and gives him or her opportunity to repent, not what we are seeing,” he said.

Pentecostal Assemblies of Zimbabwe leader and Zanu PF bootlicker Bishop Trevor Manhanga said TB Joshua had no power to change the political landscape in Zimbabwe. He said PM Tsvangirai’s political fortunes would not be shaped by TB Joshua or any “artifacts” received from him.

Manhanga said TB Joshua should first pray for the “burning” Nigeria before talking of visiting Zimbabwe. A fortnight ago, the Nigerian prophet allegedly told his church during a Sunday service that was broadcast on his Emmanuel TV station that he was “headed for a troubled African country”.

“Nigeria is in turmoil and Christians are being bombed but he is doing nothing. I personally do not think TB Joshua can influence the Zimbabwe political landscape. Those who think so are indulging in wishful thinking. The leadership of the nation of Zimbabwe will be determined by God Almighty not TB Joshua.

“Those who visit him in Nigeria should know that the water they are given has no significance here and will not serve as a lucky charm to bring them power political or otherwise. I have questions about some of his prophecies because I do not think that God is particularly interested in the outcome of football games and this has no edification value for the people,” Manhanga said.

Bishop Manhanga said real teachings should assist and mould people to be better citizens. “How does the prediction of the death of Michael Jackson help the children of God? So I do not really pay much attention to this as it does not serve to mould my character or make me a better person,” he said.

He, however, said Zimbabwean churches were not afraid of TB Joshua’s coming. “If he comes, those who want to go and listen to him should be free to do so. Even if crowds turn up for his proposed meeting, that will have no bearing on our politics. Our authorities have nothing to fear.”

The Cameroonian government last week blacklisted TB Joshua, equating him to an agent of Satan who hoodwinks unsuspecting members of the public with “diabolical miracles”. Cameroon, through Foreign Affairs Minister Eyebe Ayissi, described TB Joshua as a “son of the devil” masquerading as “a man of God”.

Pastor Godwin Chitsinde of the Spoken Word Ministries said TB Joshua should not be allowed into Zimbabwe because his interest in politics was “too excessive”.

“According to the definition of a true prophet in the Bible, TB Joshua doesn’t qualify to be one. I would not be happy if he comes on such an important national day because I believe his visit is not good for the nation considering his interest in politics. We have no problem if he comes on another day but we say no when it is an important day like this one,” he said.

“Prophecy is not about telling someone his phone number or the colour of his underwear but it is about the word of God. “We do not need him here because we have our own reputable apostles and what riles us is that he is coming on a partisan ticket without consulting the churches.”

For all the complaints from Zanu PF and their bootlicking church leaders, none of them said a word last week when ex-communicated Anglican Bishop, Nolbert Kunonga dabbled in politics when he claimed MDC-T leader, Morgan Tsvangirai, is a sell-out who should not be voted into power.

Kunonga preached about the holiness of Robert Mugabe and the ‘satanic’ behaviour of Tsvangirai to a group of disinterested church members and a pocket of Zanu PF supporters at Dimbe Primary School, Chief Svosve area. The majority of those present were state security agents from CIO and the army.

“MDC-T and its western puppet, Morgan Tsvangirai, are agents of doom fighting to reverse the land reform programme and hand back land to the former colonial white masters. Tsvangirai is also very much against the indigenisation and black empowerment programme.

“He wants to deny Zimbabweans their birthright to the country’s natural resources. Tsvangirai together with other people of his warped thinking should be flushed down the sewerage system come next elections,” ranted Kunonga. He urged people to go ahead and grab land still in the hands of white commercial farmers.

“You are sons and daughters of the soil and should not hesitate to regain land which rightfully belongs to you. Whites like other aliens should not be allowed to own land and other properties in the country as they are strangers. Tsvangirai is a white man masked in black skin. He is like the Biblical Pharaoh who enjoyed the suffering and economic deprivation of his own people. On the other hand, Mugabe is the Biblical Daniel, sent to suffer for the cause of his people.”

Kunonga boasted that he ignited the property grab as he was the first to seize Anglican Church buildings and other assets in Zimbabwe, Zambia and Malawi, starting in 2000.

“I took 3 800 church properties in the region since their title deeds were in my name. There was no way the properties could remain under charge of the church controlled by whites and their black puppets. Bishops such as Julius Makoni, Chad Gandiwa and others are MDC-T and furthered western interests,” he said.

The self-confessed Mugabe apologist, called on ‘true’ Anglicans and other Christians to join forces with Mugabe in coming bloody defence of the country.

“Churches should protect Mugabe’s indigenisation policies, no matter the cost. This world is not for cowards and as Christians; we must gear ourselves for a bloody war against white interests.

“Those who participate in the land grab and future seizure of mines and other properties in the hands of aliens, will definitely enter the kingdom of God. The Prime Minister is good for nothing and only helped to ensure whites take back land and other natural resources from the black majority.

“Elections will give Zimbabweans the opportunity to choose between good (Mugabe) and death (Tsvangirai). Vote wisely. I am a professor in my own right and would rate Mugabe’s governance as ‘very good’,” Kunonga claimed.