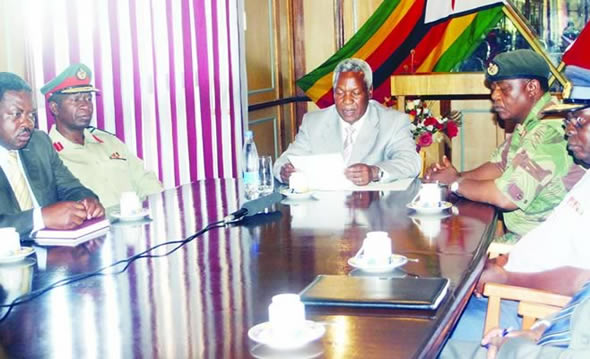 HARARE- There were fireworks at a decision-making Zanu PF politburo meeting in Harare on Thursday, as senior party officials engaged in heated exchanges over the raging Select Committee of parliament on the new constitution (Copac) disputes ahead of elections which President Robert Mugabe wants this year at all costs.

This came as army generals and top police chiefs, some of whom want to be candidates in the next elections, have taken over Zanu PF’s campaign drive and demanded that party leaders include them in their meetings. The Zanu PF commissariat is now driven by security forces, fronted by retired Air-Vice Marshall Henry Muchena and former CIO director-internal Sydney Nyanhungo.

Informed sources said a group of about 50 top army and police chiefs, whose ranks ranged from colonel to major-general, who also included a deputy police commissioner-general and an air vice marshal, descended on Manicaland last Sunday for a meeting on elections with the provincial coordinating committee at Mary Mount Teachers College in Mutare.

Sources say the security forces told Zanu PF officials they were not going to stand by while the party loses elections as some people had somewhere outside the country to seek refuge, unlike them. So Zanu PF has to win the next elections by all means necessary to protect their interests and future.

Zanu PF now seems geared for elections despite growing factionalism and infighting. The politburo met yesterday to consider issues affecting the party ahead of elections, including the chaotic constitution-making process, factionalism fuelled by District Coordinating Committee (DCC) elections and the party’s general preparedness for polls expected this year or next year.

Senior party officials told the Zimbabwe Independent last night the politburo would have an extraordinary meeting soon, preferably in two weeks’ time, to tackle the issue of factionalism linked to Mugabe’s simmering succession battle. Mugabe’s succession fight is now intensifying amid fears he would not be a viable candidate, due to old age complications and ill-health especially if elections are held next year.

Mugabe and his loyalists are now pushing that Copac must fast-track its process to produce a new constitution hurriedly or else they would plough ahead with elections without a new founding law. The president and his diehards are angered by Zanu PF faction leaders grouped around Vice-President Joice Mujuru and Defence Minister Emmerson Mnangagwa who are now using Copac as a theatre for succession battles.

Sources said there was heated debate in the politburo yesterday, mainly featuring Zanu PF Copac co-chair Paul Mangwana and party strategist Jonathan Moyo, as well as heavyweights who removed their gloves to fight for their positions. Mangwana defended Copac and its widely- criticised draft, while Moyo tore it apart, resulting in him securing the backing of Mugabe and the politburo.

Moyo, it was said, would now be one of a core team of senior party officials, which includes Mnangagwa and administration secretary Didymus Mutasa, monitoring and clearing Copac issues on behalf of Zanu PF. Moyo is also in another Zanu PF committee advising party officials in Copac.

Zanu PF spokesman Rugare Gumbo told the Independent after the politburo meeting: “The meeting indicated we need to decide on the way forward if the management committee does not come up with answers. President Mugabe made it very clear that he wants the draft as soon as possible and gave them up to next week to hand it over to them (the principals)”.

Gumbo added: “We want the management committee to produce a report that says they have either resolved or deadlocked. If they have deadlocked, then we will say let’s forget about the process and use the old constitution”.

On the security forces’ involvement in party politics, Gumbo said the matter would be discussed at a special politburo meeting to be held in a fortnight’s time, together with the factionalism crisis.

“We are going to deal with that issue at our special meeting,” he said, adding it was the president who ordered the special meeting in two weeks’ time to deal with the internal strife. He said we should sit down and not be superficial about the issue. President Mugabe said we should sit down and talk frankly and pour our hearts out and decide on the way forward,” Gumbo said.

Sources in the provincial executive who attended the meeting in Mutare told the Independent yesterday the army and police chiefs arrived in a “no-nonsense mood”, and quickly set the tone and tempo, warning Zanu PF could not afford to lose the next elections. This almost certainly would raise the stakes in the next elections, seen as do or die for Mugabe and the Zanu PF.

In a bid to crush dissent and whip supporters into line, police deputy commissioner-general Matanga, who addressed the meeting which lasted less than an hour, said they would now be working as a team with the provincial leadership and party bigwigs in the province to ensure Zanu PF regains constituencies lost to the MDC-T in the last elections.

Prime Minister Morgan Tsvangirai’s party won 20 of the 26 seats in the province during 2008 polls. It also holds four of the six senate seats of the province.

The top army and police chiefs called the meeting following angry demonstrations in the province by hundreds of disgruntled party supporters protesting the way District Coordinating Committee (DCC) elections were conducted. They alleged massive rigging, imposition of candidates, use of fake voters’ rolls and manipulated results.

Factionalism within Zanu PF structures is threatening to ruin the party ahead of the make-or-break elections.

Sources said Zanu PF national commissar Webster Shamu presented a report at yesterday’s politburo meeting on the DCC elections and subsequent infighting in the provinces. He is now expected to present a more comprehensive one at the extraordinary politburo meeting. Shamu and other senior party officials have been fire-fighting to prevent the infighting from spreading across the party like veld fire. Zimbabwe Independent

Why comic Zambian president must ‘Sata’ up