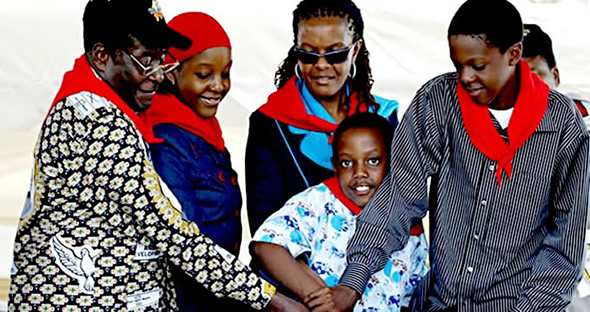 HARARE – President Robert Mugabe’s son, Robert Jnr, who has made it into the national basketball team, has flunked his A-Level exams and is now repeating, his father has confirmed.

But Robert Jnr who failed the subjects he wrote at A Level, needs not despair as his dad is now paying for his private lessons.

Robert Jnr is probably following in the footsteps of his mother Grace, who caused a major embarrassment when she was forced to drop out of  University of London in 2004 after failing dismally, getting grades below 10 percent.

The First Lady was studying for a Bachelor of Arts (English) degree through distance education but somehow she recently passed at a Chinese university with a degree in Chinese.

But Robert Jnr has a chance to sit again for the exams in June or November this year to atone for the disappointment he caused to his family, especially the father who values education.

Mugabe told the state media in a birthday interview published yesterday that his son will have to take the exam again, saying he seems to have been distracted by his passion for basketball at Kutama College. Robert Jnr is also a known football follower who locally passionately supports Harare giants CAPS United.

“He (Robert Jnr) did not do well in his A-Level exams,” Mugabe told the state-run The Sunday Mail.

“We have now had to get him private teachers. He enjoys this basketball thing. He likes it, he goes to the gym after that, but aahh… we were given the impression he was working hard. ‘How are you doing?’ we would ask him, and ‘yes, the papers were not hard,’ he would say.”

Mugabe who turns 88 tomorrow spoke of his heartache at his son’s unclassified marks.

“We expected he would get through, but no, he became an undertaker! ‘U’s! That is why they call them undertakers!” Mugabe said. “The whole group were all undertakers; about six of them.”

“The girl was not like that,” he said referring to his daughter Bona, who graduated last year from the southern Chinese city of Hong Kong with an accounting degree. We are with her for now,” Mugabe said. “She wants to be a chartered accountant. We are very happy for her…She is now 23.”

Bona, named after Mugabe’s mother, was set to get married, Mugabe said, provoking unanswered questions about the boyfriend. “She will be wanting to get married in a year or two, perhaps,” Mugabe said. “They don’t wait. They want to get married soon. She is a home girl though, not as outgoing as her brother.”

Asked if any of his children take after him, Mugabe, who boasts an impressive array of degrees, said: “They are still young. The girl, perhaps, yes.”

It took Mugabe’s wife eight years of study at the University of London since 1996 to scratch two passes. She failed to meet a December 2004 deadline to complete the degree programme and she was subsequently deregistered.

She attained the dismal results even though Mugabe was her tutor. She wed Mugabe in 1996, long after their affair had yielded two children while the president was still married to his first wife, Sally, who died in January 1992. Daily News

Zanu PF ban of NGO’s in Zimbabwe self defeating