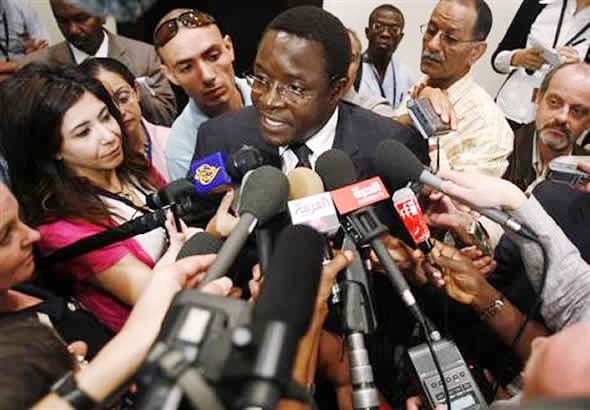 HARARE- Presidential spokesman George Charamba may land in hot soup following revelations that he was working closely with hardliners, who include army generals, to manage President Robert Mugabe ahead of elections envisaged for 2012.

Impeccable sources in the politburo told the Zimbabwe Independent this week that the military was setting up parallel structures so as to take over the day-to-day running of government. Defence Forces Commander General Constantine Chiwenga is reportedly behind the establishment of the parallel structures.

Efforts to obtain comment from General Chiwenga were unsuccessful as his mobile phones were not reachable. An army sposkesman declined to comment, saying it was a political issue.

In an interview with the Independent yesterday, Charamba confirmed working with the securocrats, saying there was nothing sinister about his working relationship with them because of the nature of his job as the presidential spokesman.

“Do I work with the generals? — Well it depends kuti (on) it’s over what. If Chiwenga has an important speech, he sometimes asks me to work with his speech writers or asks me to go through his draft speech — so do other ministers. I have several ministers that come to me and they ask me to draft their speeches,” he said.

“But I don’t work with the generals to write the president’s speech.”

Asked why he is always seen at Defence House visiting Chiwenga, Charamba said: “I have no apologies to make about being at Defence House, or at the PGHQ (Police Headquarters) or (the army’s) KG6 — these are the structures I work for.”

Party sources said the military’s plans have advanced to the extent that they are now intercepting speeches approved by Mugabe and exchanging them with alternative speeches prepared at Defence House. This, sources say, is a direct order from Chiwenga.

Charamba dismissed this saying the military has never originated a draft for the president’s speech.

“Speeches from the president come in three forms – they are originated by the president himself, or by his personal staff, who include Charamba, principal private secretary Lawrence Kamwi, his deputy or my deputy and/ or a draft comes from the inviting organisation,” he said.

The sources, however, cite what happened at Zanu PF’s 12th national conference in Bulawayo earlier this month, where Mugabe was allegedly given a different keynote speech from the one he had approved. A four-minute drama unfolded soon after Mugabe took to the podium.

Charamba was captured by journalists’ microphones pitched at the podium taking responsibility for the mess. When the drama was unravelling, Charamba was seen bowing his head before Mugabe with his hand on his chest in an apologetic posture.

Charamba said he never received a tongue-lashing from Mugabe but was only asked by the president if changes he had made to the draft had been incorporated in the final speech.

He said he worked on the draft speech and gave it to Kamwi in Bulawayo on Wednesday evening, who made adjustments, before handing it to the president on Wednesday morning.

“As the press secretary, I must make sure everything for the president is in place. Just as I got to the podium, the president asked where the speech with hand written corrections was and he asked if they had finished correcting it.

“I told him that they had finished and I told him that what he had was the clean copy. He said that was fast and said thank you. The discussion was very amicable,” he said.

However, politburo sources, who were privy to what was going on behind the scenes, said Mugabe largely ignored the new speech and spoke off the cuff for nearly three hours on issues in the original approved speech.

One politburo member said: “A coterie of army commanders is working with some Zanu PF politicians and top civil servants. They have set up parallel structures that make critical decisions – they are the ones pushing for elections next year.

“What happened in Bulawayo is one key example of what is happening and a clear sign that decisions are being made elsewhere. This has never happened before, where the president’s speech is written elsewhere.

“If you noticed on the last day of the conference, the president spent most of his time going through his closing speech – I suppose to make sure it was the right one, the one he had approved.”

The sources said this was not the first time there was an attempt to switch Mugabe’s speech with one he had not approved. This happened in Mozambique at the unveiling of the statue of late Mozambican president Samora Machel, but they were unsuccessful.

One politburo member said: “This third force, which has a military component, is a reality. We had initially dismissed press reports that there was this third force emerging, but now there is evidence to show that they are really serious about ruling this country.”

Information obtained by the Independent suggests that Chiwenga could be interested in becoming president after Mugabe.

Chiwenga is referred to within military circles as “Zim 2” – implying he is effectively number two to Mugabe. This was also revealed in meetings between Brigadier-Generals Herbert Chingono and Fidelis Satuku and US ambassador Ray Charles. The Zimbabwe Independent