Soccer Star of the Year awards set for Friday 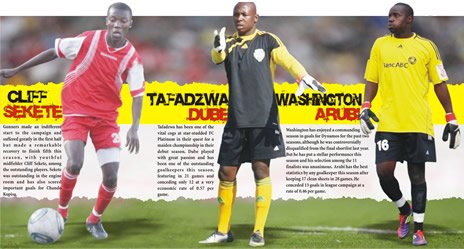 The domestic Premiership will crown its best player this season when the winner of the 2011 Castle Lager Soccer Star of the Year award is unveiled in Harare tonight. A big bash has been organised to celebrate the outstanding performance of the footballers who illuminated the scene this year.

As was the case with the previous years, questions have been asked about the inclusion of some players on the final list of XI and the exclusion of others who made a big impact. Graham Ncube’s inclusion on the list has caused quite a stir in a season when Highlanders were very ordinary while the exclusion Guthrie Zhokinyi, in a season DeMbare were at their best defensively, has been criticised. But that is the way football is.

Who will walk away with the big award remains to be seen. Online polls on the social media sites seem to favour Arubi after his brilliant season for the Glamour Boys in which he became the rock on which they built their championship winning story. But being a favourite of the fans and winning the hearts of the football writers are two different things and there have been a number of surprises in the past.

In a rare move by the selectors, they settled for two goalkeepers after FC Platinum ‘keeper, Tafadzwa Dube, turned on the show during the season. Mighty Bulls’ fans will feel that a third ‘keeper should have been included because their man, Marlon Jani, was also brilliant this season. Goalkeepers hardly win the big award but it looks like Arubi could make it tonight and follow in the footsteps of M’parutsa in 1982 and Murambadoro in 2003.

Arubi, who was controversially disqualified from the final shortlist last year, turned on a stellar show this season and his selection among the 11 finalists was unanimous. Statistics show that he was the best among the good crop of goalkeepers that also included Dube and Jani. Arubi played all but two games in the league for Dynamos and conceded 13 goals, which also make him a strong contender for the Goalkeeper of the Year award.

Dube has been one of the vital cogs at star-studded FC Platinum in their quest for a maiden championship in their debut season. Dube played with passion and has been one of the outstanding goalkeepers this season, featuring in 21 games and conceding only 12 at a rate of 0.57 per game. Gunners’ Sekete has also been shortlisted for the Rookie of the Year award reserved for the players under the age of 20 years.

Dynamos’ Denver Mukamba, who failed to garner enough votes to be among the 11 finalists, is also among the three finalists in this category, with Chicken Inn’s highly-rated Morris Kadzola also in the running for the US$ 2 000 award. The award was won by Charles Sibanda last year after he led Motor Action to their maiden championship title.

But the dreadlocked forward was disqualified this year for disciplinary reasons, which also cost Dynamos hotshot forward Roderick Mutuma a place among the XI stars after he picked six yellow cards. Others believe Mutuma could even have been full value for the Soccer Star of the Year award if he hadn’t been disqualified. Mutuma, though, is set to collect US$3 000 for winning the Golden Boot after finishing the season with 14 goals to his credit.

Dynamos’ defender George Magariro, Donald Ngoma (FC Platinum), Nkosana Siwela (Hwange), Rahman Kutsanzira, Graham Ncube (both Highlanders), Abbas Amidu (Black Mambas), and roving CAPS United rightback Tapiwa Kumbuyani are also on the shortlist. The Soccer Star of the Year award carries a US$5 000 cash prize and a trophy while the first runner-up will walk away US$3 000 richer and the second runner-up receives US$ 2 000.

The other eight finalists are guaranteed US$1 000 each. The organisers will also crown the Coach of the Year while the most outstanding referee and the two runners-up will also receive their prizes. Ndebele said the PSL were happy with the way the selection process went on.

“Unlike the previous years where the selection was embroiled in controversy, this one was smooth this year,” said Ndebele. For the first time we had an inclusive panel that included the media, referees, coaches and representatives from the players’ union and we are happy that they stuck to the laid down rules and regulations.

“We are also going to announce the monthly awards for the past nine months but they will only receive their prizes next week because we don’t want the process to be cumbersome (tonight).”